Revenues of $166.8 million improved 8.6% from the year-ago quarter, surpassing the Zacks Consensus Estimate of $163 million. The reported figure was also better than the higher end of management’s guidance of $160 million to $166 million. 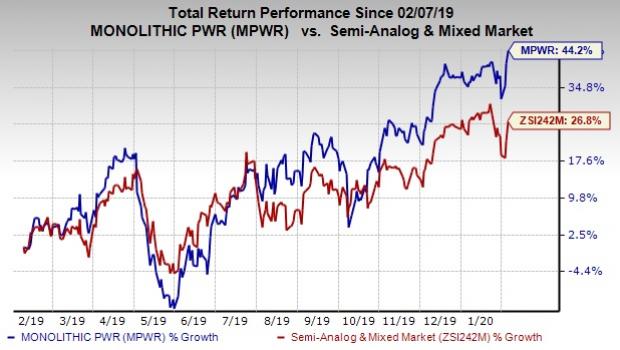 Notably, shares of the company have returned 44.2% in the past year, outperforming the industry's rally of 26.8%.

Non-GAAP gross margin contracted 10 basis points (bps) from the year-ago quarter to 55.5%. Management had predicted the figure between 55.2% and 55.8%.

Non-GAAP operating expenses were $41.8 million during the reported quarter, up 7.9% year over year. As a percentage of revenues, the figure expanded 110 bps on a year-over-year basis to 25%.

Monolithic Power generated operating cash flow of approximately $61 million compared with $72.4 million in the prior quarter.

For first-quarter 2020, Monolithic Power forecasts revenues between $161 million and $167 million. The Zacks Consensus Estimate for revenues is currently pegged at $158.98 million.

We believe Monolithic Power has significant prospects on account of robust product portfolio that targets In-Car connectivity and infotainment, advanced driver assistance system (ADAS), and rapid adoption of LED lightings in cars and vehicles. Accelerated deployment of 5G is expected to favor growth in Communications end-market.