On a reported basis, the company posted earnings of 48 cents per share compared with 44 cents in the prior-year quarter.

Total sales came in at $2,719 million in the reported quarter, down from $2,803 million in the year-ago quarter. The top line missed the Zacks Consensus Estimate of $2,887 million.

Selling, general and administrative expenses fell 29.3% year over year to $89 million. Adjusted operating income increased 14% to $340 million from the year-ago quarter figure of $298 million. The company reported operating margin of 12.5% compared with 10.6% in the year-ago comparable period.

The Beverage packaging’s North and Central America segment revenues decreased to $1,111 million in the fourth quarter from $1,113 million a year ago. Operating earnings went up 8.6% year over year to $139 million.

Sales at the Beverage packaging, Europe segment came in at $599 million in the reported quarter, declining 4% year over year. Operating earnings increased 6.3% year over year to $67 million. Segment volume was driven by customers’ increasing preference for can over glass packaging, strong growth for energy drinks and growing demand for specialty cans.

The Beverage packaging South America segment’s revenues declined to $460 million during the fourth quarter from $472 million in the prior-year comparable period. Operating earnings moved up to $95 million from $78 million in the year-earlier quarter. Industry beverage can demand in South America remains strong as customers are shifting from glass packaging to aluminum cans.

In the Aerospace segment, sales rose 10.8% year over year to $398 million. Operating earnings fell to $37 million from year-ago quarter figure of $38 million. As of the end of 2019, the segment’s contracted backlog increased to $2.5 billion. Since then, the company has won contracts worth $4.2 billion, which have not yet been included in the backlog.

The company has returned more than $1 billion to shareholders in 2019 through dividends and share repurchases.

Ball Corp continues to anticipate long-term earnings per share growth of 10-15% and EVA dollar growth in the current year. The company is committed to improving earnings and cash flow in order to support disciplined capital investments and return value, worth $1 billion, to shareholders in 2020.

Ball Corp’s shares have appreciated around 43.9% over the past year, outperforming the industry’s growth of 40.4%. 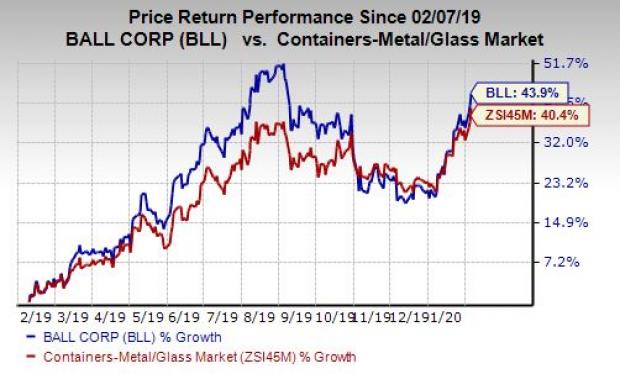