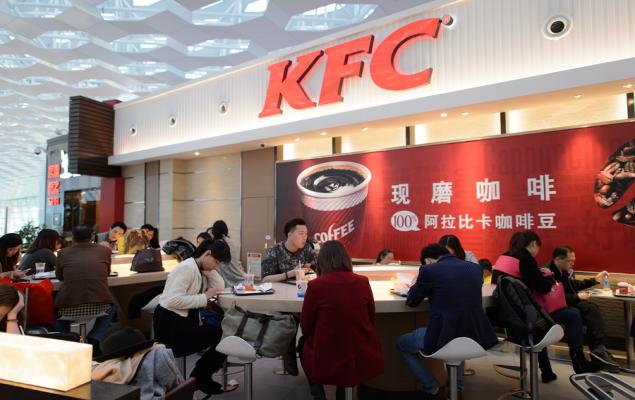 Following the results, the company’s shares declined 2.8% in the after-hour trading session on Feb 5. Weak view for 2020 amid the coronavirus outbreak might have dented investors’ sentiments for the time being. However, shares of Yum China have gained 1% in the past six months against the industry’s 3.3% decline.

Adjusted earnings of 25 cents surpassed the Zacks Consensus Estimate of 15 cents. The reported figure also increased 108.3% from the year-ago quarter. Considering the mark to market gain or loss from the company’s equity investment in Meituan Dianping in 2019 and 2018, earnings remained flat year over year.

The company’s total revenues of $2.03 billion topped the consensus mark of $2.02 billion and grew 6% year over year. Excluding foreign currency translation, the top line increased 8% on a year-over-year basis.

Total system sales in the reported quarter improved 8% from the year-ago period, owing to system sales growth of 10% at KFC and 1% at Pizza Hut. Also, same-store sales grew 2% year over year, primarily owing to a 3% rise at KFC. The same at Pizza Hut remained flat with the prior-year figure.

In the fourth quarter, total costs and expenses increased 6% year over year to $1,935 million. This upside was due to a 19% increase in general and administrative expenses, 6% rise in food and paper costs, 4% rise in payroll and employee-benefit costs, along with a 4% hike in company restaurant expenses.

Restaurant margin in the quarter under review was 12.4%, reflecting a 90-basis point increase from the year-ago period. This rise in restaurant margin was due to sales leverage, productivity improvement and other cost savings, partially offset by wage and commodity inflation and promotional activities.

Adjusted operating profit totaled $105 million, up 12% from the year-ago quarter. Adjusted net income increased to $98 million from $46 million in the prior-year period.

Adjusted earnings came in at $1.88 per share, reflecting an increase of 23% year over year. Revenues of $8.78 billion grew 4% from the year-ago quarter. Total system sales were up 9% from the prior-year quarter, led by 11% growth at KFC and 3% at Pizza Hut. Adjusted operating profit increased 7% from the year-ago period to $912 million.

In the quarter under review, the company’s board of directors announced a cash dividend payout of 12 cents per share on its common stock, payable on Mar 25, 2020 to its stockholders of record at the close of business as of Mar 4, 2020. Additionally, Yum China repurchased 1.3 million shares for $57.2 million.

In the fourth quarter, Yum China opened 360 new restaurants and remodeled 416. The company’s delivery contributed 23% to sales in the fourth quarter, up 3 percentage points from the prior-year period. Delivery services expanded to 1,249 cities, up from 1,118 in the prior-year period. Digital orders accounted for 61% of sales in the quarter under review, marking an increase of 17 percentage points year over year.

Yum China expects to reach its new store target of 800-850 for 2020. The company expects capital expenditure between $500 million and $550 million.

It highlighted that the outbreak of coronavirus in China is expected to have a materially adverse impact on the company's operating and financial results for first-quarter and full-year 2020. The company has been undertaking numerous measures to protect employees, customers and business partners. These measures include the temporary closure of more than 30% of restaurants in China. Since the Chinese New Year holiday period, same-store sales for restaurants that remained open were down 40-50% from the comparable period of 2019. This was mainly due to shortened operating hours, reduced traffic and other factors related to the outbreak.

The company even stated that it may experience operating losses in first-quarter 2020 and 2020, upon continuation of the sales trend.

Denny's and Brinker’s earnings are expected to grow 18.1% and 10.2%, respectively, for the current year.

Dunkin’ has an impressive long-term earnings growth rate of 10.9%.