What's in Store for Digital Turbine (APPS) in Q3 Earnings?

For the quarter, Digital Turbine expects revenues between $37 million and $38.2 million. The Zacks Consensus Estimate for revenues is currently pegged at $37.6 million, indicating 23.6% growth from the figure reported in the year-ago quarter.

Moreover, the Zacks Consensus Estimate for earnings stands at 6 cents per share, unchanged over the past 30 days, and suggests growth of 200% from the figure reported in the year-ago quarter.

The company’s earnings beat the Zacks Consensus Estimate in the trailing four quarters, the average positive surprise being 81.25%. 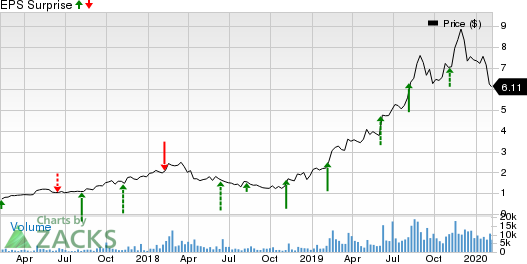 Digital Turbine is expected to have benefited from strength in its mobile device management platform, Ignite, which gained significant traction during the third quarter.

During the quarter, the company focused on adding strategic resources to improve international revenue-per-device (RPD) and scale partnerships and infrastructure, which is expected to have driven incremental increases in spending by high profile multinational advertising clients such as Pinterest, Twitter and Uber.

Additionally, improvement in global RPD indicated by solid demand for the company’s ad solutions is expected to have benefited the company in the third quarter.

Moreover, strong contributions from products like SingleTap, Folders, App Wizard and Notifications are expected to have contributed to the company’s top line.

Digital Turbine continued integration with new demand sources from SingleTap partners like AppsFlyer, Branch and Kochava in the to-be reported quarter. These are well-known attribution and analytics companies, covering roughly 85% of the global mobile applications market.

Growth in devices based on SingleTap is expected to have driven more international advertising partners to the platform in the third quarter.

Further, an expanding partner base, which includes Pandora, Uber, Netflix, Twitter, Pinterest and others, is likely to have enhanced penetration in the third quarter.

Notably, the company intends to expand from 50 to 70 countries with its new partner, Samsung, by the end of second-quarter fiscal 2020. Developments related to this initiative are likely to have boosted the company’s growth and credibility among international advertisers and other global OEM partners.

For example, during the third quarter, Digital Turbine became the official partner to deliver Disney’s (DIS - Free Report) Disney+ on Android devices. Notably, the company already handles distribution and management of high profile applications such as Facebook, Netflix and Apple music for Verizon.

According to the Zacks model, the combination of two key ingredients — a positive Earnings ESP and Zacks Rank #1 (Strong Buy), 2 (Buy) or 3 (Hold) — increases the odds of a positive earnings surprise. You can see the complete list of today’s Zacks #1 Rank stocks here.

Digital Turbine has an Earnings ESP of 0.00% and a Zacks Rank #3. You can uncover the best stocks to buy or sell before they’re reported with our Earnings ESP Filter.

Here's How Molson Coors (TAP) is Placed Ahead of Q4 Earnings