Trinseo S.A. TSE logged a profit of $6 million or 14 cents per share in fourth-quarter 2019, compared with a loss of $1 million or 2 cents a year ago.

Barring one-time items, earnings were 35 cents a share, up from 23 cents per share a year ago. It, however, trailed the Zacks Consensus Estimate of 44 cents.

Revenues fell around 17% year over year to $888.8 million in the quarter, hurt by lower prices and reduced volumes in Feedstocks, Polystyrene and Synthetic Rubber segments. It also missed the Zacks Consensus Estimate of $933 million. The company continued to face challenging market conditions in the reported quarter.

Revenues were $3,776 million for the full year, down around 18% year over year, impacted by the pass through of lower raw material costs.

Revenues at the Latex Binders segment dropped 14% year over year to $219 million in the reported quarter due to the pass through of lower raw material costs.

Revenues at the Synthetic Rubber segment declined 23% year over year to $100 million, impacted by the pass through of lower raw material costs.

The Performance Plastics segment recorded sales $325 million, down 10% year over year due to reduced prices from the pass through of lower raw material costs and a weak polycarbonate market.

Sales at the Polystyrene segment were down 26% year over year to $176 million, affected by reduced sales volumes in Europe and the pass through of lower styrene cost.

Feedstocks segment sales dropped 13% year over year to $69 million due to the pass through of reduced market styrene prices.

Trinseo also bought back roughly 0.5 million shares in the reported quarter for around $21 million.

The guidance includes an estimated impact of $5-$10 million (pre-tax) from reduced customer demand in China in the first quarter of 2020 associated with the outbreak of coronavirus.

Trinseo’s shares have lost 36.9% over a year, underperforming the industry's decline of 19.8%. 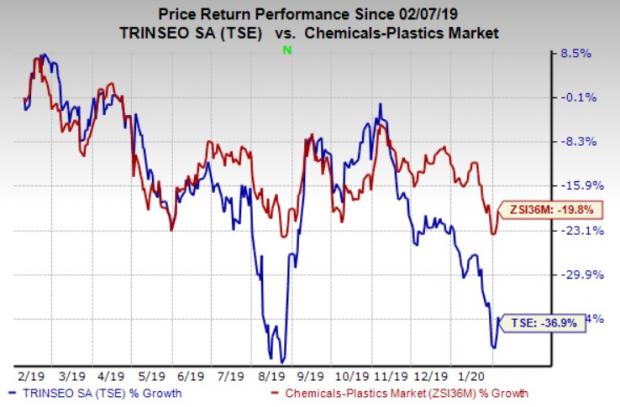 Daqo New Energy has projected earnings growth rate of 326.3% for 2020 and sports a Zacks Rank #1 (Strong Buy). The company’s shares have rallied roughly 93% in a year’s time. You can see the complete list of today’s Zacks #1 Rank stocks here.

Pretium Resources has projected earnings growth rate of 106.9% for 2020 and carries a Zacks Rank #2 (Buy). The company’s shares have rallied around 35% over a year.