Kinross (KGC) to Post Q4 Earnings: What's in the Offing?

The company has trailing four-quarter positive earnings surprise of 233.3%, on average. Kinross’ fourth-quarter results are likely to reflect the benefits of higher gold prices and strong performance in Russia as well as the Tasiast and Paracatu. 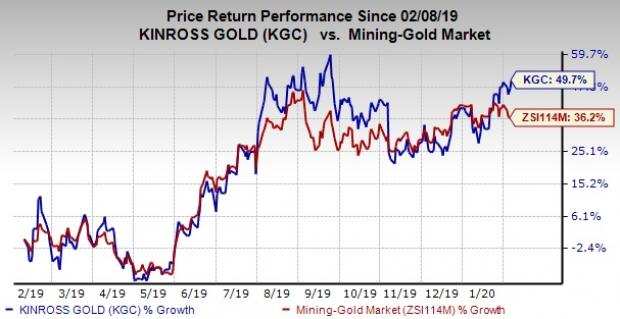 Let’s see how things are shaping up for the upcoming earnings release.

The Zacks Consensus Estimate for fourth-quarter gold equivalent production for Kinross is currently pegged at 608,000 ounces, which suggests a decline of 3.6% year over year.

Construction and commissioning of the Round Mountain Phase W and Bald Mountain Vantage Complex is complete. Severe weather conditions and poor vendor performance have affected production ramping at Bald Mountain. Heap leach at the project was completed in the third quarter and it is now fully-operational. As the production have been increasing steadily since early September 2019, higher production is likely to have benefited the company’s fourth-quarter performance.

In the third quarter, the fleet prioritized to alleviate wall failure at Round Mountain that occurred late in 2019. Consequently, fewer tons were stacked on the heap leach during the third quarter. While mitigation work has been completed and stacking rates have increased, production is expected to have improved sequentially in the fourth quarter.

The Gilmore project at Fort Knox is progressing per schedule and budget. Cost of sales in the project increased sequentially in the third quarter due to higher proportion of ounces produced from heap leach as well as higher maintenance cost. The trend likely continued into the fourth quarter and affected margins.

The company’s fourth-quarter results are also likely to reflect strong performance in Russia as well as the Tasiast and Paracatu. The combined Kupol-Dvoinoye operation attained the lowest cost of sales in its portfolio in the third quarter. Benefits of lower costs are expected to have continued into the fourth quarter.

At Tasiast, production and cost performance remained strong in the third quarter, reflecting the benefits of the Phase One expansion. This trend is likely to have continued into the fourth quarter.

The company’s fourth-quarter performance is also likely to reflect the benefits from higher gold prices. Uncertainties regarding the U.S.-China trade war, rate cuts by the U.S. Federal Reserve, global downturn concerns and tensions in the Middle East are some factors that have supported gold prices in 2019. In fact, Kinross saw its average realized gold prices surge 21.3% year over year in the third quarter. Higher year-over-year gold prices are likely to have supported the company’s fourth-quarter margins.

Our proven model doesn’t conclusively predict an earnings beat for Kinross this time around. The combination of a positive Earnings ESP and a Zacks Rank #1 (Strong Buy), 2 (Buy) or 3 (Hold) increases the chances of an earnings beat. But that’s not the case here.

Earnings ESP: Earnings ESP for Kinross is -2.44%. The Zacks Consensus Estimate is currently pegged at 10 cents. You can uncover the best stocks to buy or sell before they’re reported with our Earnings ESP Filter.

Cleveland-Cliffs Inc. CLF, scheduled to release fourth-quarter 2019 earnings on Feb 20, has an Earnings ESP of +6.25% and carries a Zacks Rank #3.

AK Steel Holding Corporation , scheduled to release earnings on Feb 20, has an Earnings ESP of +16.67% and carries a Zacks Rank #3.