With an aim to boost profits amid a tough operating backdrop, HSBC Holdings plc’s HSBC interim chief executive officer, Noel Quinn, is expected to unveil a new strategy update on Feb 18, when the bank announces its 2019 results.

The strategy overhaul will likely include a new round of job cuts and reduce the banks’ presence in some smaller markets. The job cuts will be targeted toward senior international managers.

Per sources, the cuts will be implemented within global managerial roles across all business units, with most of the cuts targeting the London operations, although jobs in Asia will not be spared.

Concurrent with HSBC’s second-quarter 2019 earnings release, it was announced that John Flint stepped down as the CEO after serving for nearly one and a half years.

Since then, Quinn, the chief executive of global commercial banking, has assumed the responsibility as the interim CEO.

In October 2019, just a few months after being appointed as the interim CEO, Quinn initiated a round of cost cutting. The move was expected to result in a reduction of nearly 10,000 jobs, particularly in Europe and the higher-paid roles globally. This move was part of the bank’s broader objective of reducing almost 4,000 jobs globally in 2019, accounting for nearly 2% of its total workforce.

Over the past years, HSBC has focused on profitable markets and on enhancing operating efficiency by divesting non-core businesses. While these efforts helped the company lower costs in 2017 and 2018, the trend reversed in the first nine months of 2019.

Notably, Quinn’s strategy update comes amid global economic growth concerns and a low interest rate environment across the world. In fact, HSBC’s largest market, Hong Kong, has been facing unrest since the past few months along with fears over the fast-spreading coronavirus.

Moreover, the ambiguity related to Brexit has been weighing on HSBC’s top-line growth to some extent since the past several months.

Since 2015, HSBC has made significant investment in Asia, mainly in China, and has benefited from it. Though the company’s revenues increased in the first nine months of 2019, growth has remained subdued in its mature markets like Europe, the U.K. and the United States.

Quinn, in his strategy update, is expected to announce plans of boosting profits outside Asia. Management will likely conduct a review of some of HSBC’s markets that produce low returns.

Notably, per people with knowledge of the matter, HSBC, under Quinn, also plans to sell or shrink its business in some markets where it has small-scale operations that struggle to compete with local players like Armenia, Greece and Oman.

While no final decision has been made yet, HSBC is also seeking to sell its banking business in Turkey because of concerns about the country's volatile currency and economic outlook.

While the company’s initiatives to improve market share in the U.K. and China are likely to support financials in the long term, these are expected to result in an increase in expenses.

Its initiatives to strengthen digital capabilities globally and improve operating efficiency through further restructuring efforts will support profits in the long term. However, given the disappointing revenue growth assumptions, the company no longer expects to achieve its targeted return on tangible equity ratio in 2020.

Shares of HSBC have lost 11.1% in the past year compared with a 4.9% decline of the industry it belongs to. 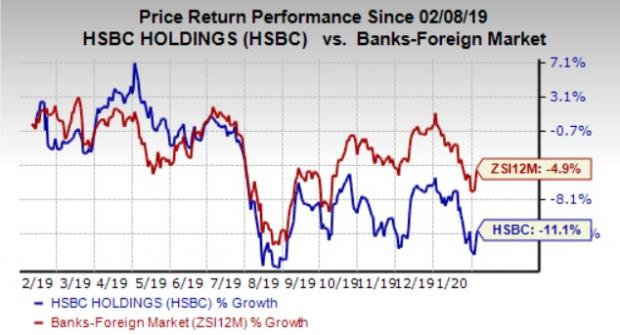 Notably, several other companies have also been reducing workforce amid increasing geopolitical tensions in the past few months. Some of them are Deutsche Bank (DB - Free Report) , Nomura Holdings, Inc. NMR and Citigroup C.

Lattice (LSCC) to Report Q4 Earnings: What's in the Cards?