Allegion plc (ALLE - Free Report) announced twin rewards for its shareholders in the form of share buyback authorization and a hike in its quarterly dividend rate. These rewards were approved by its board of directors.

We believe that such disbursements vouch for Allegion’s shareholder-friendly policies and a strong cash position.

Under the new buyback program, Allegion is allowed to repurchase up to $800 million worth shares. Notably, the company’s new buyback plan replaces the one that was authorized by its board in 2017.

Additionally, the company announced 19% or 5 cents per share rise in the quarterly dividend rate, which now increased from 27 cents to 32 cents. On an annualized basis, the dividend raised to $1.28 per share from $1.08. This increment marks the company’s 6th consecutive year of dividend raise.

Allegion will pay out the revised dividend on Mar 31, 2020 to its shareholders of record as of Mar 17.

Allegion uses free resources to strengthen its growth prospects and reward its shareholders through share buybacks and dividend payments.

Over the last five years (2014-2018), the company’s annual dividend payments climbed from 32 cents per share to 84 cents. Also, it bought back shares worth $292.7 million during the same time frame.

In the first nine months of 2019, the company distributed dividends totalling $75.5 million and repurchased shares worth $179.7 million.

The company currently has a market capitalization of $12.4 billion and a Zacks Rank #3 (Hold). It is poised to gain from a strengthening electronic business, pricing actions, improved operational efficacy and shareholder-friendly policies. However, rising costs, huge debt load and forex woes are concerning.

Earnings estimates for Allegion have been lowered in the past 60 days. Currently, the Zacks Consensus Estimate for the bottom line is pegged at $4.87 for 2019 and $5.34 for 2020, indicating a downward revision of 0.4% and 0.2% each from the respective 60-day-ago figures.

In the past three months, the stock has rallied 14.5% against the industry’s decline of 3.8%. 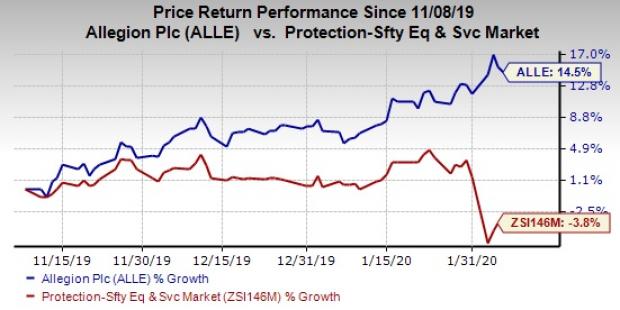 Lyft (LYFT) to Report Q4 Earnings: What's in the Offing?