Skechers USA, Inc. SKX reported in-line earnings in fourth-quarter 2019. This designer, developer, marketer and distributor of footwear reported quarterly earnings of 39 cents a share, in line with the Zacks Consensus Estimate. Moreover, the bottom line improved 25.8% from 31 cents per share reported in the year-ago period.

Sales beat the Zacks Consensus Estimate for the third quarter in a row. Moreover, the top and bottom lines maintained the trend of recording year-over-year increase.

Management expects the outbreak of coronovirus in China to impact the company’s results in first-quarter 2020.

This Zacks Rank #3 (Hold) company generated net sales of $1330.7 million that increased 23.1% (or 23.8% on a constant-currency basis) from the year-ago quarter and beat the Zacks Consensus Estimate of $1,243 million. The top-line growth was backed by strength in domestic and international businesses, with each region contributing to double-digit growth.

Although shares of Skechers have gained roughly 19% in the past year, it underperformed the industry's 21% rally. 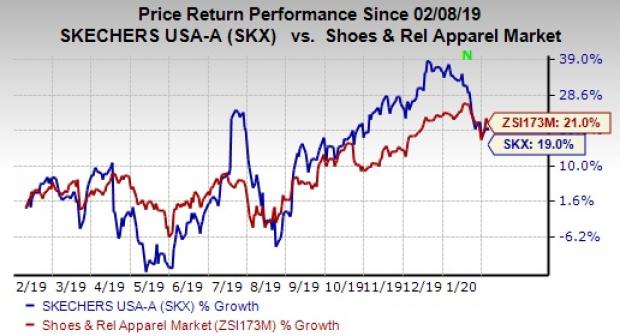 The company’s international wholesale business improved from a year ago, driven by growth in subsidiaries, joint ventures and distributor businesses. Management stated that Skechers witnessed growth across all regions, with China, India, the United Kingdom and UAE being the biggest drivers. Markedly, its joint venture in Mexico is performing well.

Gross profit in the reported quarter grew 23.7% from the prior-year figure to $637.7 million. Moreover, gross margin expanded 20 basis points to 47.9% on improved average selling price per unit. This was partly offset by higher average cost per unit on increased duties in the domestic wholesale business.

Operating income came in at $94.1 million, up 12.4% from the prior-year quarter, while operating margin contracted 60 basis points to 7.1%.

Management incurred capital expenditures of roughly $66 million during the quarter, with a total spending of $240.7 million in 2019.

For 2020, the company plans capital spending of approximately $325-$350 million. This will be used to complete the construction of the China distribution center, expand the U.S. distribution facility, open 115-125 new company-owned Skechers stores, and carry out 20-30 store remodels, expansions and relocations. Moreover, the capital expenditure will be used for the expansion of corporate headquarters and technology investments, primarily in the direct-to-consumer business.

Of the total international stores, 2,747 are owned and operated by international distribution partners, joint ventures, and a network of franchisees. Total store count at the end of 2019 was 3,547, including 800 company-owned stores. In 2020, the company plans to open 75-80 new stores in the United States, 40-50 wholly-owned company stores in international markets and 550-650 Skechers third-party stores.

For first-quarter fiscal 2020, the company provided a softer-than-expected guidance. The company’s guidance incorporates an initial estimate of the impact from the current situation in China due to the outbreak of coronavirus. This has resulted in the temporary closure of stores and below-average comparable store sales. It may change the guidance if the situation in China worsens, affecting the company’s business outside China and hurting the supply chain.

Management anticipates first-quarter 2020 earnings in the range of 70-75 cents a share, whose higher-end is lower than the current Zacks Consensus Estimate of 77 cents.

Moreover, the company expects net sales in the band of $1.400-$1.425 billion. The Zacks Consensus Estimate for sales for the first quarter is $1.41 billion.

Deckers Outdoor DECK has a long-term earnings growth rate of 12.4% and a Zacks Rank #1 (Strong Buy). You can see the complete list of today’s Zacks #1 Rank stocks here.

lululemon athletica inc. LULU has a long-term earnings growth rate of 18.9% and a Zacks Rank #2 (Buy).