Including one-time items, the company reported net loss of $1.17 per share in the fourth quarter as against the net income of $1.26 per share recorded in the prior-year quarter.

Revenues declined 3% year over year to $2,513.6 million. In addition, the figure missed the Zacks Consensus Estimate of $2,662.2 million. Excluding unfavorable currency-translation impact of 2.4%, net sales edged down 0.6% year over year.

The quarterly results reflect the impact of challenging farming conditions, primarily in Europe and South America. The results were also adversely impacted by higher-than-expected new product-warranty costs, and charges related with brand and product rationalizations within the grain and protein business.

Selling, general and administrative expenses edged down to $272.4 million from the prior-year quarter’s $272.5 million. Adjusted income from operations declined 17.5% year over year to $132.8 million. Consequently, operating margin came in at 5.2% compared with the year-earlier quarter’s 6.2%.

Sales in the North America segment inched up 1.8% year over year to $540.5 million during the October-December period. The segment reported operating income of $7.1 million compared with the prior-year quarter’s $6.2 million.

Sales in the South America segment dipped 20% year over year to $220.9 million. The segment reported an operating loss of $18.2 million, as against the prior year’s operating profit of $10.6 million.

AGCO reported cash and cash equivalents of $432.8 million at the end of the reported quarter, up from the $326.1 million witnessed at the end of 2018. The company recorded $695.9 million of cash in operating activities during the 12-month period ended Dec 31, 2019, compared with $595.9 million reported in the prior-year period.

AGCO now projects current-year net sales at around $9.2 billion, reflecting improved sales volumes and positive pricing. The company anticipates year-over-year gross and operating margin improvement, aided by positive impact of pricing and cost-reduction actions. Considering these, the company now estimates EPS in the band of $5.00 to $5.20.

Per the USDA’s projection, the U.S farm income in 2020 will remain challenging due to low commodity prices and uncertainty with Market Facilitation Program payments.

The company projects North American industry tractor sales to be modestly down in the current year from the prior-year level. For the ongoing year, European farm income is expected to be softer due to lower milk prices, partly offset by more normalized crop production.

Consequently, AGCO expects sluggish industry demand across the European markets. However, industry demand in Brazil is anticipated to improve, while uncertainty regarding export demand and potential changes to the subsidized financing program might dampen farmer sentiment.

Over the past year, AGCO’s stock has gained around 5.8%, outperforming the industry’s growth of 3.4%. 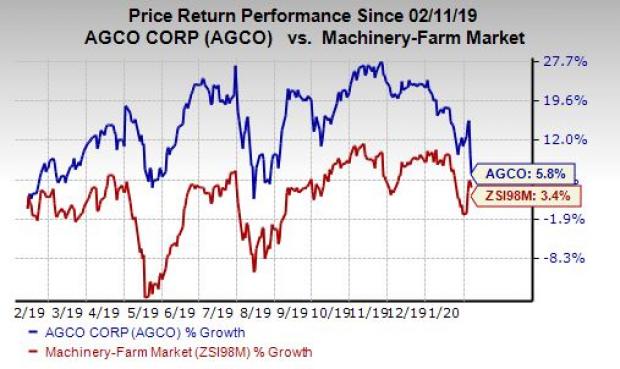 Zoetis (ZTS) to Report Q4 Earnings: What's in the Cards?