The company has a market capitalization of $2.5 billion and a Zacks Rank #4 (Sell) at present. It belongs to the Zacks Manufacturing – Tools & Related Products industry, currently at the top 42% (with the rank of 106) of more than 250 Zacks industries. You can see the complete list of today’s Zacks #1 Rank stocks here.

We believe that the industry is suffering from global uncertainties, unfavorable movements in foreign currencies, softness in industrial production in the United States and cost escalation — resulting from tariff woes, commodity inflation, high labor costs and freight charges.

In the past three months, Kennametal's shares have declined 13.2% compared with the industry’s growth of 1.1%. 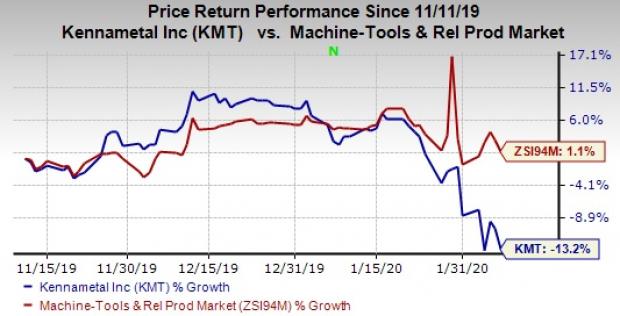 Weak Projections: Kennametal expects that end-market challenges, issues related to 737 MAX and higher tax rates will adversely impact its results for the second half of fiscal 2020 (ending June 2020). It expects organic sales decline of 9-12% for the year versus a fall of 5-9% mentioned earlier.

Restructuring Costs: Kennametal’s simplification/modernization actions adversely impacted its operating results in the second quarter of fiscal 2020. Notably, pre-tax charges of $51 million or 39 cents per share were incurred from these restructuring moves in the quarter.

Forex Woes: Presence in the Americas, the Asia Pacific, Europe, the Middle East and Africa has exposed Kennametal to geopolitical issues, macroeconomic challenges and unfavorable movements in foreign currencies. In second-quarter fiscal 2020, forex woes adversely affected the company’s sales by 1% and earnings by 1 cent per share.

Persistence of such issues might pose concerns for Kennametal.

Also, earnings estimates of 38 cents per share for third-quarter fiscal 2020 (ending March 2020) suggest a decline of 30.9% from the seven-day-ago figure.

PepsiCo (PEP) to Report Q4 Earnings: What's in the Offing?