Shares of Molson Coors grew nearly 5% in the pre-market trading session. Moreover, the Zacks Rank #3 (Hold) company’s shares have gained 11.8% in the past three months against the industry’s decline of 7.6%. 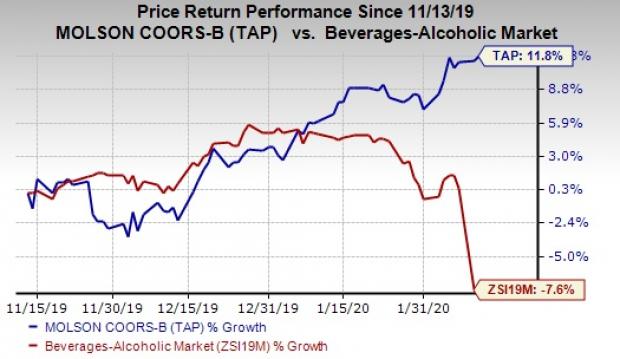 Molson Coors’ underlying adjusted earnings of $1.02 per share improved 21.4% year over year and beat the Zacks Consensus Estimate of 76 cents. The bottom line benefited from positive global net pricing, cost savings, a non-recurring gain from the resolution of a vendor dispute in the United States, lower marketing, general and administrative expenses, and timing of marketing investments.

Net sales rose 2.8% to $2,486.2 million but missed the Zacks Consensus Estimate of $2,506 million. The year-over-year improvement was driven by rise in net sales per hectoliter and higher financial volume. On a constant-currency basis, net sales increased 3%.

However, Molson Coors’ worldwide brand volume declined 1% to 21.8 million hectoliters and financial volume moved up 1% to 21.8 million hectoliters. The decline in worldwide brand volume was mainly attributed to lower economy volumes in the United States and soft performance in Canada, partly compensated by strength in International. Meanwhile, financial volume was hurt by the quarterly timing of distributor inventory levels in the United States and growth in International, partly negated by volume declines in Canada and Europe. Nevertheless, global priority brand volume was up 1.6%.

Canada: Molson Coors’ Canada net sales declined 4.6% to $307.1 million on a reported basis and 4.8% in constant currency, driven by a decline in volume and 0.7% fall in net sales per hectoliter (brand volume basis), in constant currency, driven by higher unfavorable mix. Canada brand volume fell 6.9% and financial volume decreased 4%, owing to soft brand performance and industry declines. However, financial volume partly benefited from cycling lower customer inventory levels in the prior year. Underlying EBITDA was flat with last year at $64.7 million, with a constant-currency decline of 0.9%.

United States: Molson Coors now has complete ownership rights to all the brands in the MillerCoors portfolio for the U.S. market. Net sales for the segment increased 4.7% to $1,679.9 million on reported and constant-currency basis mainly due to higher financial volume and 1.6% growth in net sales per hectoliter (brand volume basis), driven by higher net pricing.

However, U.S. brand volume declined 1.7%, owing to declines in the economy segment, offset by rise in the premium light and above premium portfolio trends. Sales-to-wholesalers (STWs) volume, excluding contract brewing, grew 2.5% on cycling lower shipments in the prior year, owing to quarterly timing of distributor inventories, partially negated by lower brand volume. The segment’s underlying EBITDA rose 16.5% year over year to $431.3 million, with constant-currency growth of 16.6%.

International: Net sales for the segment were up 7.5% on both reported and constant currency basis. Reported net sales were $62 million. Robust sales were driven by brand volume growth, offset by 5.3% fall in net sales per hectoliter (brand volume basis) in constant currency, on unfavorable geographic mix. International brand volume increased 13.9% on strong Coors Light performance in Mexico, sustained growth in Argentina and the timing of STWs. This was partly offset by India supply chain and soft demand. The segment’s underlying EBITDA was $4.1 million, reflecting year-over-year improvements of 46.4% on a reported basis and 50% on a constant currency basis.

The company generated net cash provided in operating activities of $1,897.3 million in 2019, with underlying free cash flow of $1,369.8 million.

Going forward, the company remains committed to delivering more cost savings under its next-generation cost-saving program, which began in 2020. It expects the current program to generate cost savings of $600 million over the three years ending 2022. These cost savings include $150 million related to the revitalization plan.

Further, it expects to incur one-time costs of $120-$180 million for generating savings from the revitalization plan.

Management reiterated its initial sales view for 2020. However, it revised underlying EBITDA guidance for 2020.

The Coca-Cola Company KO has long-term earnings per share growth rate of 7.2%. The company carries a Zacks Rank #2 at present.