What's in the Cards for Transocean (RIG) in Q4 Earnings?

The current Zacks Consensus Estimate for the to-be-reported quarter is pegged at a loss of 31 cents per share on expected revenues of $821.29 million. There has been no change in estimates for the bottom line over the past 30 days.

Factors at Play for Q4 Results

With the U.S. offshore industry witnessing early signs of revival, evidenced by the increasing project sanctions, Transocean is expected to have capitalized on this uptrend effectively, given its technologically advanced and versatile drilling fleet.

The company anticipates fourth-quarter adjusted contract drilling revenues to be roughly $825 million, indicating a 10.3% rise from the year-ago reported figure of $748 million. Strong revenues from Deepwater Corcovado and Deepwater Mykonos drill ships are likely to have contributed to this bullish view.

However, over the last few quarters, the company has been bogged down by operational inefficiencies, which might have hurt its margins in the quarter to be reported. Further, the company forecasts its operation and maintenance expenses to be $585 million in the fourth quarter, suggesting an increase of 18% from $497 million reported in the year-ago period. It also expects its capital outlay to escalate for the fourth quarter, which is likely to have limited its earnings growth.

The proven Zacks model does not conclusively predict an earnings beat for Transocean this time around. The right combination of a positive Earnings ESP and a Zacks Rank #1 (Strong Buy), 2 (Buy) or 3 (Hold) increases the chances of beating estimates. But that’s not the case here.

In the last reported quarter, Transocean incurred an adjusted loss of 38 cents a share, narrower than the Zacks Consensus Estimate of a loss of 40 cents. Strong revenues from the Ultra-Deepwater and Harsh Environment floaters along with higher dayrates led to this outperformance. However, the bottom line came in against the year-ago earnings of 6 cents due to higher shipyard costs and lower fleet utilization.

Meanwhile, the offshore drilling powerhouse generated total revenues of $784 million, beating the Zacks Consensus Estimate of $780 million. But the top line dipped 3.9% from the prior-year figure of $816 million.

As far as the earnings surprise track is concerned, this Switzerland-based company’s bottom line missed the Zacks Consensus Estimate in three of the trailing four quarters and beat the same in the remaining quarter, the average negative surprise being 10.79%. This is depicted in the graph below: 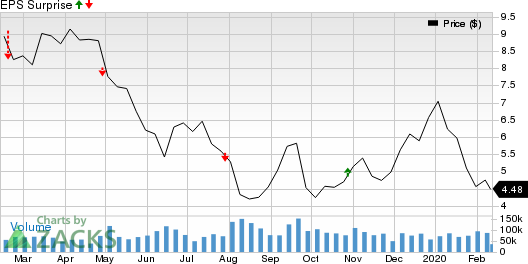 TC Energy Corporation TRP has an Earnings ESP of +0.65% and a Zacks Rank #2. The company is slated to announce fourth-quarter 2019 earnings on Feb 13.

Williams Companies, Inc. (WMB - Free Report) has an Earnings ESP of +6.78% and a Zacks Rank of 3. The company is slated to announce fourth-quarter 2019 earnings on Feb 19.

Energy Transfer, L.P. ET has an Earnings ESP of +4.86% and is Zacks #3 Ranked. The partnership is slated to release fourth-quarter earnings on Feb 19. You can see the complete list of today’s Zacks #1 Rank stocks here.