CF Industries Holdings, Inc. CF recorded profits of $55 million or 25 cents per share in the fourth quarter of 2019, up from $49 million or 21 cents in the year-ago quarter. However, earnings per share missed the Zacks Consensus Estimate of 26 cents.

The top line was hurt by lower year-over-year selling prices across all major products that more than offset increased sales volumes. Prices in the quarter were affected by greater global supply availability due to increased global operating rates.

Revenues were $4,590 million for the full year, up around 4% year over year, driven by higher average selling prices across most key products. Sales volumes for the year were flat year over year.

Sales in the UAN segment went down around 2% year over year to $336 million. Sales volumes and average selling prices were both flat year over year in the quarter.

Sales in the AN segment rose roughly 21% year over year to $117 million. Sales volumes rose year over year on the back of higher demand in the United States. Average selling prices declined year over year due to increased global supply availability.

The company expects global nitrogen demand to be positive over the near term as application seasons develop in different regions globally. In North America, crop futures and an expected return to traditional planting conditions in the region are projected to support a rise in nitrogen-consuming planted corn and coarse grain acres in 2020 on a year-over-year basis.

CF Industries also envisions demand to remain strong in India this year. It expects a new urea tender in India in late March or early April 2020. CF Industries also sees demand in Brazil to be favorable in 2020, backed by reduced domestic urea production.

Shares of CF Industries are down 2.4% in the past year compared with the industry’s 17.3% decline. 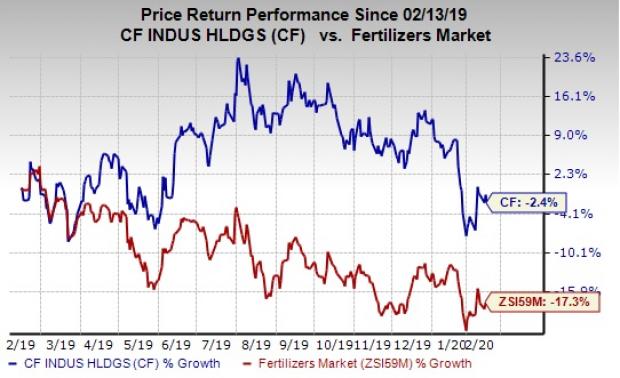 Pretium Resources has projected earnings growth rate of 105.3% for 2020 and carries a Zacks Rank #2 (Buy). The company’s shares have gained around 2% over a year.