PepsiCo’s shares gained nearly 1% in the pre-market session on Feb 13. Moreover, shares of the Zacks Rank #3 (Hold) company have rallied 29.7% in the past year, outperforming the industry’s 20.5% growth. 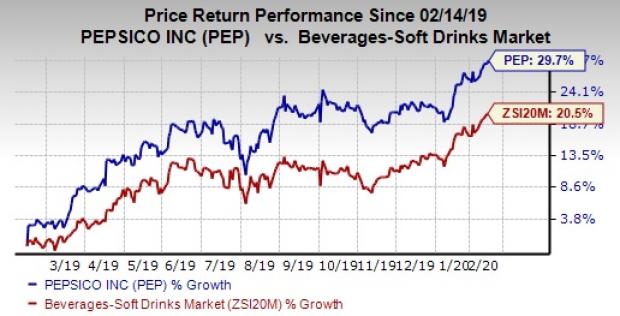 PepsiCo’s fourth-quarter core EPS of $1.45 beat the Zacks Consensus Estimate of $1.43. However, core EPS declined 2.7% year over year. In constant currency, core earnings were down 2.5% from the year-ago period. The company’s reported EPS of $1.26 declined 73.9% year over year.

Net revenues of $20,640 million advanced 5.7% year over year and surpassed the Zacks Consensus Estimate of $20,349 million. On an organic basis, revenues rose 4.3%. Foreign currency effects on revenues and earnings remained neutral in the fourth quarter.

Revenue growth, on a reported and organic basis, was primarily driven by strength in all of the company’s businesses as well as robust pricing and volume. Notably, all segments witnessed organic and reported revenue growth in the fourth quarter, except for QFNA, wherein revenues were flat. This was driven by strong progress on its strategic priorities, and investments made in its capabilities, brands, manufacturing and go-to-market capacity to boost growth.

Operating profit (on a reported basis) declined 21% for the QFNA segment and 11% for AMESA. However, it grew 28% for Europe, 16% for Latin America, 5% for PBNA, and 3% each for APAC and FLNA segments.

For 2020, PepsiCo expects organic revenue growth of 4%. Further, the company anticipates a 7% increase in core constant-currency EPS. Core effective tax rate is estimated to be nearly 21% in 2020.

Moreover, the company estimates foreign currency to impact reported revenues and core EPS growth by nearly 1 percentage point in 2020 based on current rates. Including currency impacts, it anticipates core earnings of $5.88 per share in 2020, suggesting 6% growth from $5.53 earned in 2019.

Further, management plans to return $7.5 billion to shareholders through dividend payments worth $5.5 billion and share repurchases of $2 billion. Free cash flow is estimated to be $6 billion. Operating cash flow is expected to be $11 billion, with net capital spending of $5 billion.