Barring one-time items, adjusted earnings per share were 29 cents in the quarter, down from 38 cents in the year-ago quarter. The figure topped  the Zacks Consensus Estimate of 28 cents.

Revenues were $1,657 million, down around 9% year over year. However, it surpassed the Zacks Consensus Estimate of $1,584.7 million. The company saw lower sales across its business segments in the reported quarter. It witnessed lower volumes and prices in most of its businesses.

Polyurethanes: Revenues in the segment fell 3% year over year to $980 million due to lower MDI (methylene diphenyl diisocyanate) average selling prices, which were partly offset by higher MDI sales volumes.

Performance Products: Revenues in the unit declined 10% to $278 million due to reduced average selling prices as well as lower sales volumes.

Advanced Materials: Revenues in the unit dropped 9% to $241 million due to lower average selling prices and sales volumes.

Textile Effects: Revenues in the division were down 7% to $180 million. The decline was due to lower sales volumes and average selling prices. Volumes were affected by softer demand as a result of uncertainties surrounding the trade conflict.

The company repurchased around 10.1 million shares worth roughly $208 million in 2019.

Moving ahead, Huntsman noted that it will remain focused, in 2020, on investing in its downstream and specialty platforms both through acquisitions and organically. It will also remain balanced in its capital allocation including opportunistic share repurchases and maintaining a competitive dividend.

For the Polyurethanes unit, Huntsman expects demand headwinds in several major markets and regions in 2020. It also anticipates differentiated MDI margins to be stable.

For Performance Products, the company sees growth in performance amines. It also expects weak demand in the maleic anhydride with stable margins.

For Advanced Materials, the company expects stable overall margins amid weakness in industrial markets and demand headwind in aerospace.

Huntsman's shares are down 6.1% in the past year against the industry’s 24.9% decline. 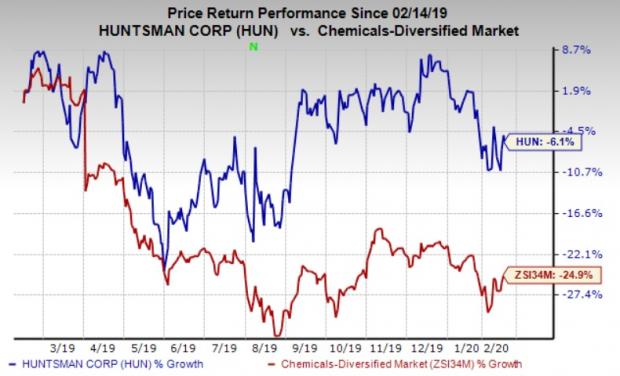 Daqo New Energy has projected earnings growth rate of 326.3% for 2020 and sports a Zacks Rank #1 (Strong Buy). The company’s shares have surged roughly 104% in a year’s time. You can see the complete list of today’s Zacks #1 Rank stocks here.

Agnico Eagle has estimated earnings growth rate of 91.7% for 2020 and carries a Zacks Rank #1. The company’s shares have shot up roughly 41% in a year’s time.

NovaGold has projected earnings growth rate of 11% for the current fiscal and carries a Zacks Rank #1. The company’s shares have surged around 146% over a year.

Synopsys (SNPS) to Report Q1 Earnings: What's in the Offing?