Newell Brands Inc. NWL has delivered better-than-expected earnings and sales results in fourth-quarter 2019. However, its top and bottom lines declined year over year on lost contributions from divested businesses, adverse foreign currency translations and a decline in overall core sales.

Nevertheless, management remains optimistic on the progress of its turnaround efforts along with operating cash flow remaining ahead of its plan. This is backed by the company’s commitment toward productivity, overhead cost savings, complexity reduction and working capital initiatives. As a result, it outlined its view for the first quarter and 2020.

Driven by the better-than-expected results, shares of Newell rose 2.5% in the pre-market trading session on Feb 14. However, shares of the Zacks Rank #3 (Hold) company have declined 1.1% in the past three months against the industry’s 6% growth. 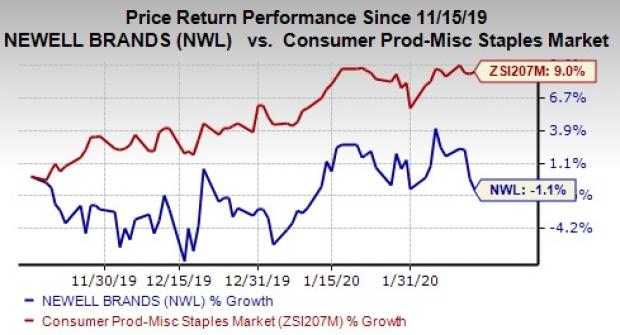 Newell’s fourth-quarter normalized earnings per share were 42 cents, which outpaced the Zacks Consensus Estimate of 39 cents. However, the metric fell 36.4% from 66 cents earned in the year-ago period. The year-over-year decline was mainly attributed to the lack of contributions from its divested operations.

Normalized gross margin declined 70 basis points (bps) to 33.5%. However, normalized operating margin remained flat at 11.3% in the quarter under review, driven by a decline in SG&A expenses.

The Learning & Development segment (including Writing and Baby) recorded net sales of $702 million in the fourth quarter, up 0.7% from the prior-year number. The segment’s core sales increased 0.9%, offset by unfavorable foreign currency. Core sales growth was backed by improvement at the Baby and Writing divisions.

Net sales at the Home & Outdoor Living segment (including Outdoor & Recreation, Home Fragrance, and Connected Home & Security) totaled $768 million, declining 5.1% from the prior-year period. The segment’s top line was hurt by unfavorable currency, the exit of about 75 underperforming Yankee Candle retail outlets in 2019 and a 2.8% decline in core sales. Core sales benefited from growth in the Home Fragrance business unit, offset by declines in Outdoor & Recreation, and Connected Home & Security.

The Appliances & Cookware segment recorded net sales of $570 million, which fell 5.6% from the prior-year number. This resulted from a 4.6% decline in core sales and currency headwinds.

Furthermore, the company strengthened its balance sheet by paying down nearly $600 million of debt in the fourth quarter.

Management provided initial guidance for the first quarter and 2020.

For first-quarter 2020, Newell estimates net sales of $1.9-$1.95 billion and core sales decline of 3-5%. It anticipates normalized operating margin contraction of 50-90 bps to 5.2-5.6%. Normalized earnings per share are expected to be 5-8 cents for the quarter.