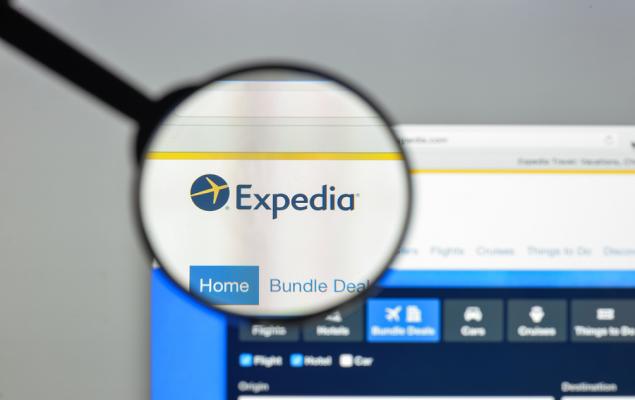 Expedia Group, Inc. EXPE reported fourth-quarter 2019 adjusted earnings of $1.24 per share, beating the Zacks Consensus Estimate by 5.1%. The figure remained flat on a year-over-year basis. However, the bottom line decreased 63.3% from the previous quarter.

However, the top line lagged the Zacks Consensus Estimate of $2.76 billion and declined 22.8% on a sequential basis.

Expedia witnessed gross bookings of $23.24 billion in the fourth quarter. The figure improved 6% year over year but declined 13.7% sequentially. Further, the figure was lower than the Zacks Consensus Estimate of $23.85 billion.

Following the better-than-expected bottom line and cost-control initiatives, shares of the company surged 12.04% in the pre-market trade.

The company remains optimistic about its strong supply acquisition efforts, strategic investments and product innovation. These initiatives are anticipated to drive business in the days ahead.

Egencia revenues (5.8% of revenues) increased 3% on year-over-year basis to $159 million. Further, quarterly bookings came in $1.9 billion, up 3% from the prior-year quarter. Growing room night growth and strengthening momentum in the corporate travel space were tailwinds.

Vrbo (9.4% of revenues) generated $259 million revenues in the fourth quarter, advancing 13% from the year-ago quarter. This segment witnessed year-over-year growth of 4% in gross bookings, which came in at $2.3 billion. Vrbo’s growing online bookable listings remained a tailwind. Further, strengthening presence in North America by launching Vrbo in Mexico and Canada benefited the segment.

Corporate (1.2% of revenues) is a new segment comprising Bodybuilding.com, which was acquired in the Liberty Expedia Holdings, Inc. transaction in the beginning of third-quarter 2019. The segment generated $34 million of revenues during the reported quarter, up 41.7% sequentially.

Agency division generated revenues of $721 million (26.2% of revenues), improving 3% from the prior-year quarter.

Advertising & Media yielded $243 million of revenues (9% of revenues), improving 4% from the year-ago quarter. This can primarily be attributed to strong performance of Expedia Group Media Solutions. However, currency headwinds and weak performance by trivago remained overhangs.

Moreover, Vrbo (9.4% of revenues) generated $259 million in the reported quarter, advancing 13% from the year-ago quarter.

Expedia generated $1.6 billion revenues (57.3% of total revenues) from domestic regions, up 10% from the prior-year quarter. This can primarily be attributed to strong domestic room nights, which improved 10% from the year-ago quarter. This led to increase in gross bookings in these regions resulting in an improvement of 7% year over year.

Further, revenues generated by international regions were $1.2 billion (42.7% of revenues), up 4% on a year-over-year basis. Expedia witnessed solid growth of 11% in room nights in international regions during the reported quarter. Further, gross bookings advanced 4% from the prior-year quarter.

Lodging revenues (69.8% of total revenues) came in $1.9 billion, advancing 9% from the prior-year quarter. This can primarily be attributed to robust stayed room nights growth on account of strong momentum in Expedia Partner Solutions, Brand Expedia and Hotels.com.

Adjusted EBITDA was $478 million, which surged 1.5% year over year. Notably, Core OTA witnessed year-over-year growth of 5%. However, Egencia, Vrbo and trivago EBITDA were down 3%, 3% and 11% from the year-ago quarter, respectively.

Further, adjusted selling and marketing expenses were $1.25 billion, up 5.9% year over year. As a percentage of revenues, these expenses contracted 70 basis points (bps) year over year to 45.7%.

Additionally, general and administrative expenses were $182 million, which remained flat year over year. However, as a percentage of revenues, the figure expanded 50 bps from the year-ago quarter to 6.6%.

Operating margin came in 5.8% in the reported quarter, which expanded 210 bps from prior-year quarter.

Further, Expedia generated $341 million of cash from operations during the reported quarter compared with $861 million of cash utilized in operations in the last quarter. Further, free cash flow was $45 million against ($1.15) billion in the previous quarter.

The company paid out quarterly dividend worth $50 million (34 cents per share) during the reported quarter.

Additionally, Coronavirus impact is likely to weigh on the company’s earnings and revenues.

Nevertheless, the company is deepening focus toward improving operational efficiency.

For 2020, the company expects adjusted EBITDA to grow by double digits. Further, the company aims to achieve $300-500 million of run-rate cost savings across its businesses.

Long-term earnings growth rate for Zumiez, eBay and Genesco is currently pegged at 12%, 10.26% and 5%, respectively.