Mosaic (MOS) to Report Q4 Earnings: What's in the Offing?

The Mosaic Company MOS is set to release fourth-quarter 2019 results after the closing bell on Feb 19. The impacts of lower prices and sales volumes are likely to reflect on its results. Hefty charges are also expected to have impacted its margins in the quarter.

Mosaic’s adjusted earnings of 8 cents per share for the third quarter fell well short of the Zacks Consensus Estimate of 27 cents, translating into a negative surprise of around 70.4%. The company faced challenging market conditions in the quarter.

The fertilizer maker beat the Zacks Consensus Estimate for earnings in two of the trailing four quarters while missed twice. In this timeframe, it delivered a negative surprise of around 19.1%, on an average. 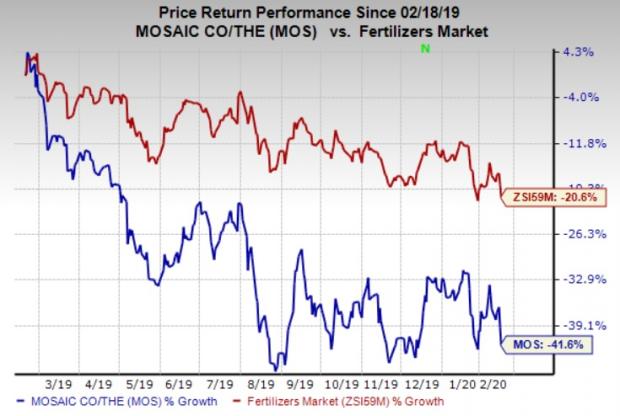 The Zacks Consensus Estimate for Mosaic’s fourth-quarter consolidated sales is currently pegged at $1,941 million, which suggests a fall of 23% from the year-ago quarter’s tally.

The Zacks Consensus Estimate for net sales for the Phosphates segment is currently pegged at $774 million, indicating a decline of 16.4% year over year.

Moreover, the consensus mark for net sales for the Potash segment currently stands at $430 million, which calls for an expected decline of 27.4% year over year.

The Zacks Consensus Estimate for net sales for the Mosaic Fertilizantes segment is currently pegged at $804 million, which reflects an expected decline of 17% year over year.

The company’s fourth-quarter results are expected to reflect the impacts of weaker selling prices and sales volumes. Mosaic, in December, said that the third consecutive disappointing fertilizer application season in North America resulted in continued price weakness and high inventories. These conditions have affected both phosphates and potash. The company also stated that it intends to reduce fertilizer production until markets improve.

Moreover, the company also announced plans to keep the Colonsay potash mine in Saskatchewan, Canada, idled for the foreseeable future due to soft demand conditions. The mine will be positioned in the care and maintenance phase, employ limited staff and allow operations to be resumed when necessary to meet the needs of customers. The company said that it will record pretax charges of around $530 million in the fourth quarter associated with the idling.

As such, these sizable charges related to the goodwill impairment and idling are likely to have weighed on the company’s bottom line in the December quarter.

Our proven model does not predict an earnings beat for Mosaic this season. The combination of a positive Earnings ESP and a Zacks Rank #1 (Strong Buy), 2 (Buy) or 3 (Hold) increases the chances of an earnings beat. But that’s not the case here.

Earnings ESP: Earnings ESP for Mosaic is +100.00%. The Zacks Consensus Estimate for the fourth quarter is currently pegged at a loss of a penny per share. You can uncover the best stocks to buy or sell before they’re reported with our Earnings ESP Filter.

Eldorado Gold Corporation EGO, scheduled to release earnings on Feb 20, has an Earnings ESP of +23.81% and carries a Zacks Rank #3. You can see the complete list of today’s Zacks #1 Rank stocks here.

AK Steel Holding Corporation , scheduled to release earnings on Feb 20, has an Earnings ESP of +11.11% and carries a Zacks Rank #3.

First Majestic Silver Corp. AG, slated to release earnings on Feb 19, has an Earnings ESP of +8.33% and carries a Zacks Rank #3.

Here's How Hormel Foods (HRL) is Placed Ahead of Q1 Earnings