ViacomCBS (VIAC) to Report Q4 Earnings: What's in the Cards?

Notably, this is going to be the company’s first earnings conference call. ViacomCBS came into existence post the completion of the merger between CBS Corporation and Viacom Inc., as announced on Dec 4, 2019.

ViacomCBS Class A and Class B shares began trading on the Nasdaq on Dec 5, 2019, under the ticker symbols “VIACA” and “VIAC”, respectively.

Markedly, the Zacks Consensus Estimate for fourth-quarter earnings has decreased 2.8% to $1.40 over the past 30 days. Moreover, the consensus mark for sales is pegged at $7.35 billion. 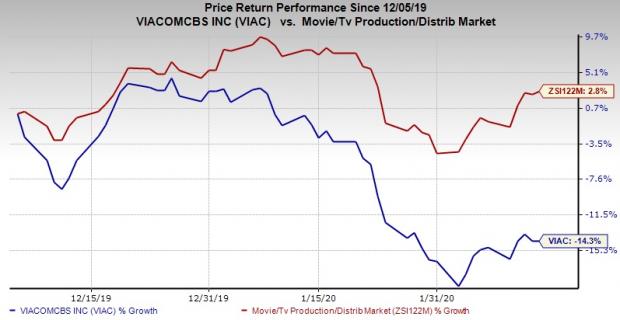 ViacomCBS is expected to have benefited from a strong content portfolio, which includes more than 140,000 premium TV episodes and 3,600 film titles, post the merger.

Moreover, a solid portfolio of streaming services (both advertising and subscription-based offerings), including CBS All Access, Showtime OTT, Pluto TV, Noggin and BET+, is expected to have benefited the top line in the to-be-reported quarter.

Additionally, higher investments in original content and focus on providing quality entertainment are expected to have expanded the audience base for brands like MTV, BET and Comedy Central.

Furthermore, the growing popularity of direct consumer offerings, including CBS.com and CBSN, is expected to have driven ad revenues in the to-be-reported quarter.

Moreover, Nickelodeon shows launched in the quarter might have positively impacted viewer engagement.

However, the disappointing box-office performance of Terminator: Dark Fate is expected to have dragged down Paramount’s top line.

According to the Zacks model, a company with a positive Earnings ESP along with a Zacks Rank #1 (Strong Buy), 2 (Buy) or 3 (Hold) has a good chance of beating estimates. But that is not the case here.

ViacomCBS has a Zacks Rank #3 and an Earnings ESP of -7.71%. You can uncover the best stocks to buy or sell before they’re reported with our Earnings ESP Filter.

Stocks With the Favorable Combination

Here are some companies, which, per our model, have the right combination of elements to post an earnings beat this quarter:

Autohome ATHM has an Earnings ESP of +4.84% and a Zacks Rank #2. You can see the complete list of today’s Zacks #1 Rank stocks here.

Deere (DE) to Report Q1 Earnings: What's in the Offing?