Deere (DE) to Report Q1 Earnings: What's in the Offing?

Deere & Company DE is scheduled to report first-quarter fiscal 2020 results on Feb 21, before the opening bell.

Which Way are the Estimates Trending?

A Sneak Peak into Q4 Performance

Deere’s shares have gained 5.7% over the past year compared with the industry’s 5.1% growth. 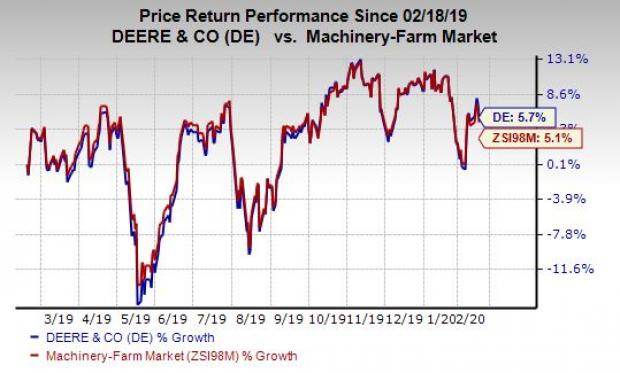 Lower commodity prices, poor growing and harvesting as well as tariffs and trade-related concerns have made farmers cautious about spending on farm equipment, straining Deere’s revenues. Also, inflated raw-material costs, resulting from tariff implementations, are likely to have dragged down the company’s margins in the fiscal first quarter. Nevertheless, cost management, footprint assessment and continued investment in innovative technology and solutions are likely to have driven the company’s performance. Further, replacement demand will likely reflect on the to-be-reported quarter’s revenues.

The Zacks Consensus Estimate for the Agriculture and Turf equipment segment’s net sales is currently pegged at $4.21 billion for the quarter to be reported, suggesting a decline from the year-earlier quarter’s $4.68 billion. The Agriculture and Turf equipment segment’s operating income is projected at $280 million, down from the prior-year quarter’s $348 million.

The Zacks Consensus Estimate for the Construction & Forestry segment’s sales is pegged at $1.94 billion for the November-January period, suggesting a drop of 14% from the year-ago quarter’s reported figure. The Construction & Forestry segment is estimated to report an operating profit of $168 million, indicating a fall of 26.6% from the year-earlier quarter’s $229 million. The segment is anticipated to have declined in the fiscal first quarter owing to sluggish construction activity and underproduction to retail volume.

The Zacks Consensus Estimate for net sales of equipment operations (which comprise Agriculture and Turf, Construction and Forestry) is $6.15 billion, calling for a decline of 11.3% from the year-ago quarter’s reported figure. Softer large equipment demand might have hampered industry sales of agricultural equipment in the United States and Canada.

Our proven model doesn’t conclusively predict an earnings beat for Deere this season. The combination of a positive Earnings ESP and a Zacks Rank #1 (Strong Buy), 2 (Buy) or 3 (Hold) increases the odds of an earnings beat. But that’s not the case here. You can uncover the best stocks to buy or sell before they’re reported with our Earnings ESP Filter.

Earnings ESP: The Earnings ESP for Deere is 0.00%. This is because currently the Most Accurate Estimate and the Zacks Consensus Estimate are both pegged at $1.30.

Here are some stocks worth considering as these have the right combination of elements to post an earnings beat this quarter.

Applied Optoelectronics, Inc. AAOI has an Earnings ESP of +8.12% and carries a Zacks Rank #3, currently. You can see the complete list of today’s Zacks #1 Rank stocks here.

The AES Corporation AES has an Earnings ESP of +0.76% and is currently a Zacks #3 Ranked stock.

What's in Store for Genuine Parts (GPC) This Earnings Season?