The company has an impressive Momentum Score of B, which reflects the short-term attractiveness of the stock.

Estimates for Cincinnati Financial have been raised over the past 30 days, reflecting analysts’ confidence in the stock. The Zacks Consensus Estimate for 2020 earnings per share has moved up 1.3% in the said time frame. Further, the company has an impressive history of beating estimates in the trailing four quarters, with the average beat being 17.9%.

Shares of the Zacks Rank #1 (Strong Buy) property and casualty insurer have rallied 34.8% in a year, outperforming the industry’s growth of 11.8%. 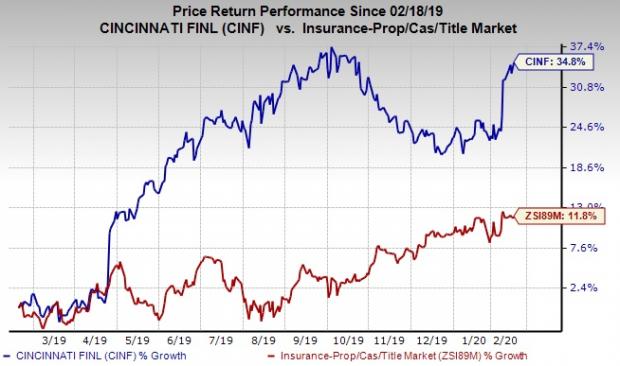 Cincinnati Financial’s return on equity was 7.5% in the trailing 12 months, higher than the industry average of 7%. Return on equity is a profitability measure that identifies a company’s efficiency in utilizing its shareholders’ funds.

The company continues to benefit from the consistent performance of its Commercial Lines Insurance segment, resulting in top-line growth over the past several quarters. The momentum continued into 2019 on several growth initiatives and price increases. Total revenues for the year were $7.9 billion, up 47% year over year. We also expect the segment to perform well going forward.

For efficient pricing decisions, the company remains committed to executing its strategic initiatives. Since its inception in 2008, Cincinnati Financial’s Excess and Surplus (E&S) line has been performing well. Over the past five years, E&S net written premiums have nearly doubled. Despite a soft market environment, the segment has been able to achieve rate increases consistently for the past few years. We expect the upward trend to continue on improving excess and surplus lines market.

Moreover, the appointment of new agencies was one of the several initiatives undertaken by the company. In 2019, it appointed 187 independent agencies, 70 of which are related to personal lines of products. In 2020, it plans to further appoint 125 additional agencies, mostly offering property casualty insurance products and another 35 catering to personal lines. These agencies along with others appointed in recent years are expected to offer multiple potential opportunities to the company for enhancing its market share.

CNA Financial offers commercial property and casualty insurance products mainly across the United States. The company beat the Zacks Consensus Estimate in each of the trailing four quarters, the average beat being 9.4%.

Markel is a diverse financial holding company. It markets and underwrites specialty insurance products in the United States, the U.K., Canada and internationally. The company beat the Zacks Consensus Estimate in two of the last four quarters, the average beat being 23.14%.

American Financial engages primarily in property and casualty insurance products in the United States, with a focus on specialized commercial products for businesses. The company beat the Zacks Consensus Estimate in three of the trailing four quarters, the average beat being 5%.