Motorola Solutions, Inc. (MSI - Free Report) has won a landmark trial against the manufacturer of radio transceivers, Hytera Communications Corporation, over charges of copyright infringement and hiring in-house engineers to steal vital trade secrets to exploit two-way radio technology.  This brought an end to a prolonged legal battle between the two companies that started in 2017.

However, the China-based firm claimed that despite Motorola’s abundant wireless radio resources, it has manipulated dominant market position and intellectual property lawsuit to choke competition in the global market. Further, Hytera claimed that while it strives to promote fair competition, Motorola leaves no stone unturned to erase the same by misleading customers and dealers with ambiguous information. As of now, Motorola will demand a global mandate to block the further use of copyrighted source code and trade secrets, thereby prohibiting the sale of Hytera’s radios in the United States.

As one of the top providers of mission critical communication products and services, Motorola garners steady revenues from this niche market. The equipment maker intends to fortify its position in the public safety domain by entering into alliances with other players in the ecosystem. The company is poised to benefit from organic growth and acquisition initiatives, disciplined capital deployment, and favorable global macroeconomic environment. Its competitive position and an attractive portfolio for large addressable market augur well for growth.

Motorola has long-term earnings growth expectation of 8.5%. Driven by strong business trends, the stock has added 33% compared with the industry’s growth of 19.6% in the past year. 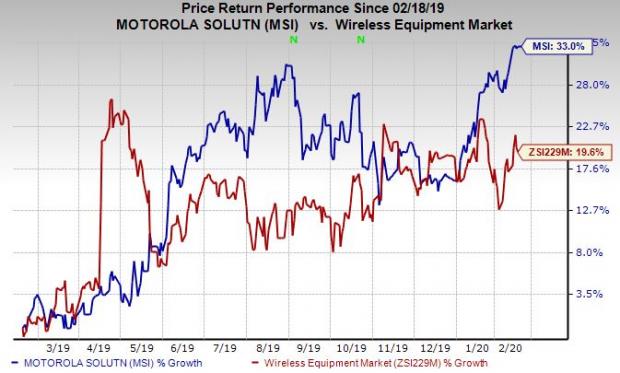 Perion exceeded estimates in each of the trailing four quarters, the positive earnings surprise being 87.9%, on average.

BlackBerry exceeded estimates twice in the trailing four quarters, the positive earnings surprise being 68.8%, on average.

CyberArk exceeded estimates in each of the trailing four quarters, the positive earnings surprise being 30.4%, on average.