Adjusted earnings per share of 62 cents outpaced the consensus mark by 21.6% but decreased 42% year over year.

Total revenues of $1.03 billion surpassed the consensus estimate by 2.5% but decreased 10% year over year on a reported basis and 8% on an adjusted basis (adjustments were made for currency exchange). The downside was mainly due to lower global production, especially in North America and Europe, the downward trend in passenger car diesel fuel injection systems in Europe, and the closure of certain customer production sites in North America. These were, however, partially offset by an increase in sales of passenger car gasoline fuel injection systems in China.

Over the past year, shares of Delphi Technologies have decreased 19.5% compared with 5.1% decline of the industry it belongs to. 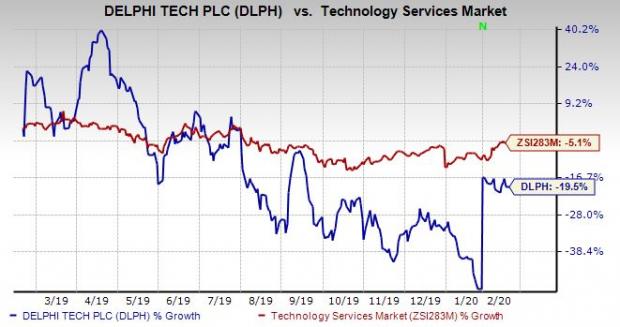 Region-wise, adjusted revenues declined 13% in Europe, 18% in North America and 17% in South America, partially offset by 14% growth in Asia Pacific.

Adjusted operating income of $75 million decreased 40% from the prior-year quarter. The downside was due to unfavorable product mix, especially between higher margin passenger car diesel fuel injection systems and lower margin advanced gasoline direct injection fuel systems, and lower volumes, which were, partially offset by the benefits of announced restructuring initiatives.Adjusted operating income margin of 7.1% declined from 10.7% in the prior-year quarter.

The company repurchased shares worth $45 million in 2019.

Investors interested in the broader Zacks Business Services sector are awaiting fourth-quarter 2019 earnings of key players like Stericycle SRCL, ICF International ICFI and ServiceMaster , each slated to release their results on Feb 27.

Is a Beat in Store for Sonic Automotive's (SAH) Q4 Earnings?