Advanced Micro Devices AMD is rapidly gaining footprint among cloud computing and datacenter providers, thanks to its EPYC processors.

This is also helping AMD, which carries a Zacks Rank #3 (Hold), to improve its competitive position against the likes of Intel INTC and NVIDIA NVDA. 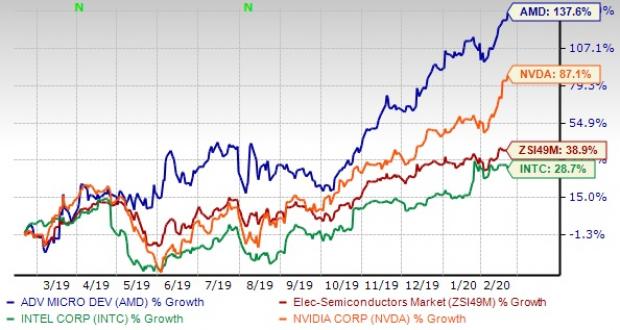 It would be foolish to ignore Intel and NVIDIA’s endeavors in the cloud and datacenter space.

In the fourth quarter of 2019, revenues from Intel’s data-centric businesses came in at $9.44 billion (46.7% of total revenues), up 6% collectively on a year-over-year basis. Strong mix of high-performance second-gen Xeon Scalable processors and solid demand for Cloud service providers (CSP) led to the upside. CSP revenues improved 48%.

Moreover, Intel’s third-generation Xeon scalable processor, Cooper Lake, is set to be launched in the first half of 2020.

NVIDIA intends to focus on new growth drivers for its data center business such as inference, data science and machine learning techniques.

The Zacks Rank #3 (Hold) company anticipates datacenter TAM to more than double to $50 billion by 2023. Most preferred by datacenter operators, NVIDIA’s GPUs are likely to help the company grab a larger market space. The acquisition of Mellanox is a key catalyst in this regard.

In fourth-quarter fiscal 2020, revenues from Data Center increased 43% year over year and 33% sequentially to $968 million. Hyperscale demand was driven by purchases of both training and inference products in support of key AI workloads such as natural language understanding, conversational AI and deep recommendators.