Last week, Latin American carrier Copa Holdings CPA announced fourth-quarter 2019 results wherein it beat on both the top and the bottom line. Both metrics also improved on a year-over-year basis. Results were aided by an uptick in passenger revenues as demand for air travel was consistently strong.

Meanwhile, the three U.S. carriers, namely United Airlines UAL, Southwest Airlines LUV and American Airlines AAL with Boeing 737 Max jets in their fleets, extended the grounding period of the same aircraft. Notably, the jets have remained non-operational since March 2019. The current extension makes it unlikely for the fuel-efficient jets to fly in the busy summer season.

Moreover, in an environmentally-friendly move, Delta Air Lines (DAL - Free Report) announced that it will invest $1 billion over the next decade. Meanwhile, JetBlue Airways JBLU informed that its CEO Robin Hayes will hold office for an additional year through July 2022.

2. United Airlines, Southwest Airlines and American Airlines currently have 14, 34 and 24 Boeing 737 Max jets in their fleet. While American Airlines cancelled 737 MAX flights until Aug 18, 2020, United Airlines and Southwest Airlines did so until Sept 4 and Aug 10, respectively. The decision followed Boeing’s announcement that approval from regulators for flying the jets again is not expected before mid-2020. In fact, United Airlines anticipates cancelling in excess of 7,700 flights from June through September. As a result of U.S. carriers extending the grounding period, these airlines are likely to operate without the jets for the second consecutive summer season. This might dent their profitability.

3. With air-travel demand continuously surging, the risk of air travel causing environmental damage is also prevalent unless carriers take measures to counter it. Delta took a major step toward protecting the environment when it announced its decision to invest $1 billion over the next 10 years to curb the impact of air travel on climate. The carrier said that the move was in sync with its aim to become the world’s first carbon-neutral airline. According to Reuters, Delta is the first airline to make a commitment in such a huge proportion. Moreover, the carrier aims to fund research and projects related with clean air technologies.

4 In a move aimed at revamping its board, JetBlue announced that three directors, such as Joel Peterson, Frank Sica and Stephan Gemkow will retire once their current tenure expires. Peter Boneparth will replace Peterson as the Board Chair. Moreover, Robert Leduc is nominated as an independent director. Leduc, who recently retired as president of Pratt & Whitney, will stand for elections at the shareholders’ annual meeting in May. 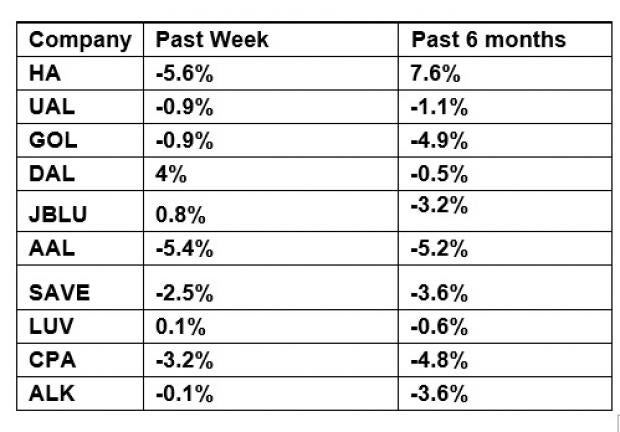 The table above shows that most airline stocks traded in the red over the past week causing the NYSE ARCA Airline Index to dip 1.8% to $110.27. Over the course of the past six months, the sector tracker has slipped 1.9%.

Investors will await the fourth-quarter 2019 earnings report of Gol Linhas GOL, scheduled to be released on Feb 20.