Adjusted earnings for the reported quarter were $1.73 per share, up roughly 13% year over year. It lagged the Zacks Consensus Estimate of $1.75.

Revenues rose around 8% year over year to $992.6 million in the quarter. It, however, missed the Zacks Consensus Estimate of $1,001 million. Revenues were aided by higher volumes in the Lithium unit and favorable pricing in Bromine Specialties and Catalysts segments.

The Catalysts unit recorded revenues of $282.5 million in the reported quarter, down roughly 7% year over year. Adjusted EBITDA was $76.7 million, down roughly 3% year over year. The company saw lower sales in Clean Fuel Technology as well as Fluid Catalytic Cracking (“FCC”) due to delays in the start-up of new FCC units.

Revenues were $3.6 billion for the full year, up around 6% year over year.

Albemarle ended 2019 with cash and cash equivalents of roughly $613.1 million, up roughly 10% year over year. Long-term debt doubled year over year to around $2,862.9 million.

Adjusted EBITDA for the year has been forecast in the range of $880-$930 million, representing 10-15% year over year decline.

The company also expects its cost-reduction program to deliver run-rate savings of more than $100 million by the end of 2021.

Albemarle’s shares are up 7.8% over a year compared with the roughly 29.6% decline recorded by its industry. 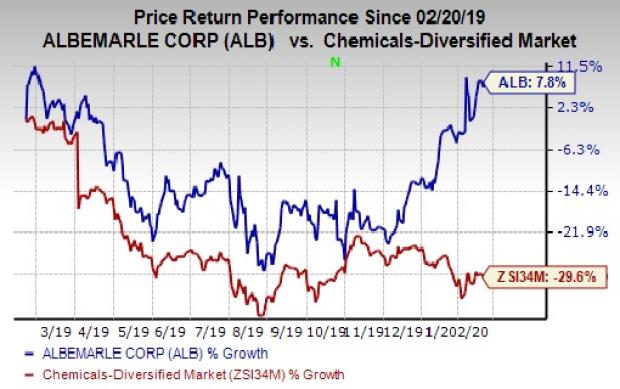 NovaGold has projected earnings growth rate of 11.1% for the current fiscal and carries a Zacks Rank #2 (Buy). The company’s shares have surged around 148% over a year.