As of Jan 31, 2020, the total number of HSAs for which HealthEquity serves as a non-bank custodian was 5.3 million, highlighting an increase of 34% from fiscal 2019. In fact, HealthEquity exited fiscal 2020 with 12.8 million total accounts, up 180% from fiscal 2019. Per management, the massive surge is attributable to the acquisition of WageWorks.

Based on the aforementioned results, HealthEquity raised its fiscal 2020 guidance.

Revenues are expected within $530-$532 million compared with the previously-projected band of $520-$526 million. The Zacks Consensus Estimate for revenues is pegged at $524.1 million.

Adjusted earnings per share are anticipated between $1.71 and $1.73. This compares to the previously announced range of $1.46-$1.52. The Zacks Consensus Estimate for the same is pinned at $1.50. 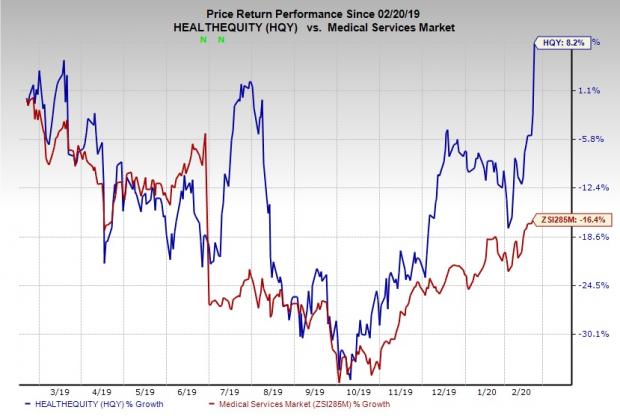 Over the past year, the stock has rallied 8.2% against the industry’s 16.4% decline.

With solid HSA member growth, HealthEquity has exited fiscal 2020 on a strong note. Solid growth in HSAs and custodial assets are expected to have bolstered the company’s top-line performance. Reflective of these, the company further raised its fiscal 2020 guidance. HealthEquity also issued an impressive view for fiscal 2021. Management is also optimistic about the WageWorks acquisition which drove total number of accounts in fiscal 2020.