In the past five trading days, telecom stocks were rattled again by the negativity triggered by the coronavirus outbreak and its impact on the global economy. The stocks mostly traded flat after an initial downturn, but witnessed a sharp turnaround in the later stages of the week as the decks were cleared for the historic industry consolidation.

China is one of the most important markets for U.S. telecom firms. Despite quarantines and other safety measures, coronavirus, which originated in Wuhan, China, managed to spread, affecting more than 74,000 people and killing more than 2,100 in the mainland alone. This disrupted normal business operations and supply-chain mechanisms of various companies as they preferred to exercise caution and held their delivery schedules to and from the communist nation until the health risks were neutralized. This, in turn, triggered uncertainty within the industry, inducing a downtrend. With the contagious disease spreading across the world despite precautionary measures and 15 positive cases confirmed in the United States to date, the markets remained apprehensive about possible repercussions.

Meanwhile, New York dropped its lawsuit challenging the merger of T-Mobile US, Inc. (TMUS - Free Report) with Sprint Corporation S – the third and the fourth-largest wireless companies in the country. With other state regulators, including California, Connecticut and Massachusetts, still reviewing their options, the balance appears to be highly skewed in favor of the blockbuster merger. This is likely to speed up the rollout of a nationwide 5G network driven by operational synergies and extended customer base on shared infrastructure assets. The combined entity will be a force to reckon with in the U.S. wireless, video and broadband industries, boasting a network capacity for nationwide 5G network deployment. The agreement also establishes Dish as a disruptive force in the wireless industry, redefining the broader industry metrics. Continued federal efforts to encourage domestic firms in developing common engineering standards for 5G networks to thwart the dominance of China-based telecommunications equipment manufacturer Huawei are also gaining in precedence.

Regarding company-specific news, quarterly earnings and launch of 5G chip primarily took the center stage over the past five trading days.

2.      Arista Networks, Inc. ANET reported mixed fourth-quarter 2019 results, wherein both the bottom line and the top line surpassed the respective Zacks Consensus Estimate. However, it reported lower revenues year over year due to muted demand in the cloud business.

Quarterly non-GAAP net income came in at $183.4 million or $2.29 per share compared with $182.2 million or $2.25 per share in the year-ago quarter. The bottom line beat the consensus estimate by 20 cents. Quarterly total revenues decreased 7.2% year over year to $552.5 million and were above the midpoint of the company’s guidance of $540-$560 million, due to volatility in the cloud business given a sudden shift in procurement strategy from a key cloud titan. This resulted in a material reduction in demand. The top line, however, surpassed the Zacks Consensus Estimate of $551 million. (Read more: Arista Beats on Q4 Earnings Despite Lower Revenues)

3.      Altice USA, Inc. (ATUS - Free Report) reported unimpressive fourth-quarter 2019 results, wherein the bottom line and the top line missed the respective Zacks Consensus Estimate. However, the company is seeing strength in broadband as it continues to reap the benefits of ongoing investments in network, including FTTH and DOCSIS 3.1 upgrades.

5.       Qualcomm Incorporated QCOM has unveiled Snapdragon-backed third-generation 5G modem — X60. Upping its 5G chip dominance in the global market, the much-awaited launch is likely to boost network performance and provide flexibility to operators with optimized spectrum resources, in the face of universal migration from 4G to full-fledged 5G ecosystem.

The latest innovation in the Snapdragon 8 Series is specifically designed for top-notch 5G services with the help of sub-6 GHz spectrum and millimeter wave technology. Per media reports, Samsung has secured the contract to manufacture the X60 chips with the first-of-its-kind 5-nanometer technology. Initially launched in 2019, these chips will be available in the markets in 2021. (Read more: Qualcomm Boosts 5G Network Connectivity With Snapdragon X60) 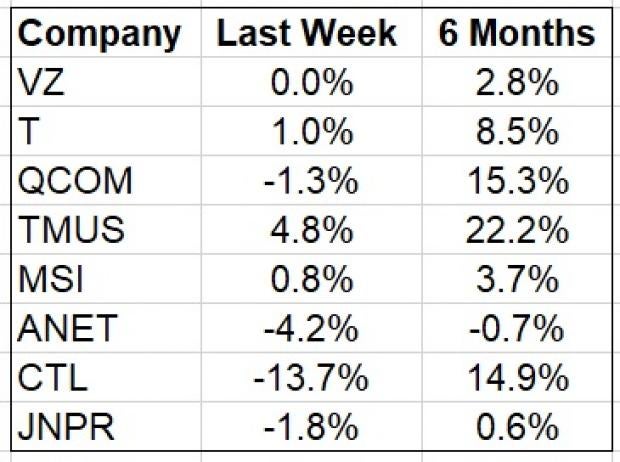 Over the past six months, the Zacks Telecommunications Services industry has recorded average growth of 9.4%, while the S&P 500 has rallied 17.3%. 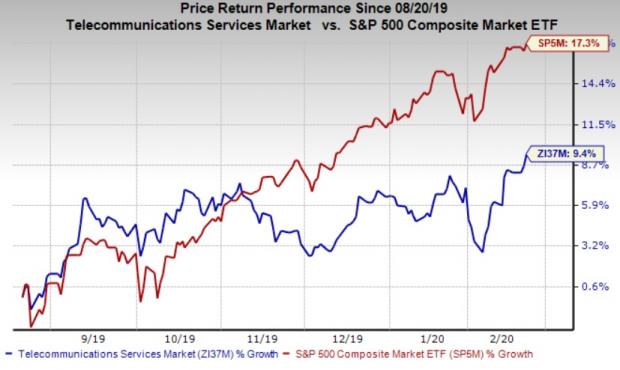