On Feb 20, we issued an updated research report on Enersys ENS. 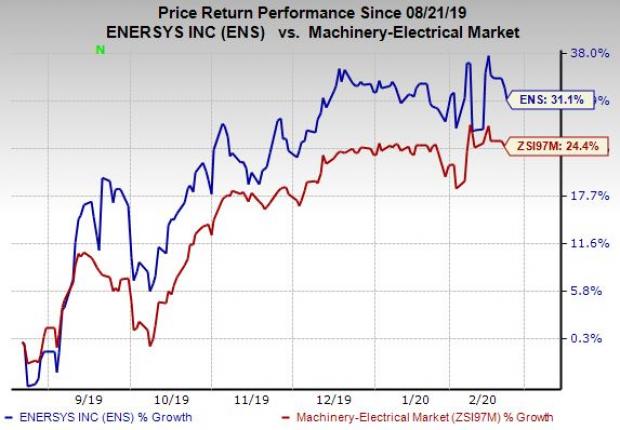 Enersys has been witnessing strength in its transportation business, driven by growing popularity for ODYSSEY brands, and solid demand for NexSys TPPL products. Notably, the company’s Americas segment is well placed to benefit from growing order rates, its efforts to expand production capacity for TPPL products and new business prospects in the long-haul spaces.

Also, EnerSys remains focused on strengthening its competency through business acquisitions. The company’s Alpha Technologies buyout (completed in December 2018) has been strengthening its product portfolio across the telecom, broadband, industrial and renewable markets. By fiscal 2021 end (ending March 2021), it expects the buyout to generate annual synergies of $35 million. In addition, it acquired NorthStar in October 2019, which has been enhancing its production capacities for TPPL products. Together, these buyouts had a positive impact of 20% on the company’s net sales in the third quarter of fiscal 2020 (ended December 2019).

Moreover, it remains committed to boosting shareholders' wealth through its capital deployment strategies. In the first nine months of fiscal 2020 (ended December 2019), the company used $22.3 million for paying dividends and $34.6 million for purchasing treasury stocks.

However, rising cost of sales has been a major concern for EnerSys. The metric rose 13.1% and 12.3% in the second quarter and the third quarters of fiscal 2020, respectively, on a year-over-year basis. Of late, the company has been experiencing high costs related to tariff and freight costs.

Dover delivered positive earnings surprise of 5.36%, on average, in the trailing four quarters.

Regal Beloit’s earnings surprise in the last reported quarter was a positive 0.81%.