What's in the Cards for Amarin (AMRN) This Earnings Season?

Amarin Corporation PLC (AMRN - Free Report) is scheduled to report fourth-quarter 2019 results on Feb 25, after market close. In the last reported quarter, the company delivered a positive earnings surprise of 200.00%.

Notably, Amarin’s earnings history is decent. This pharmaceuticals company outpaced estimates in three out of the last four quarters and missed in one, with the average beat being 109.17%.

Shares of Amarin have outperformed the industry in the past year. The stock has gained 5.3% against the industry’s decrease of 2.7%. 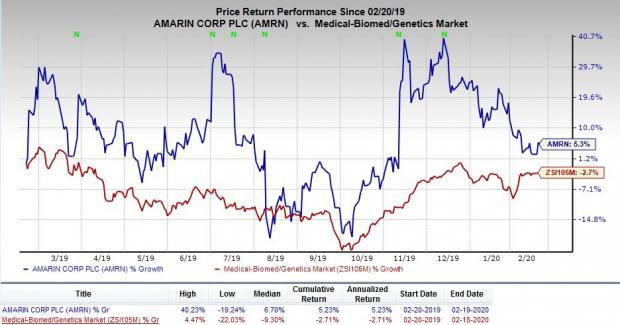 Amarin’s Vascepa demonstrated solid sales on the back of strong demand and an expanded sales force promoting the drug in the first nine months of 2019. The drug is marketed as an adjunct to diet to reduce triglyceride levels in severe hypertriglyceridemia patients. We expect the momentum to have continued in the fourth quarter. The Zacks Consensus Estimate for product sales, primarily comprising Vascepa, stands at $133 million.

The company earns fees from its licensed partners related to commercialization of Vascepa outside the United States, which is expected to have increased in the soon-to-be-reported quarter. The Zacks Consensus Estimate for licensing revenues stands at $0.74 million.

In its preliminary results announced last month, the company maintained its revenue expectation for 2020 in the range of $650-$710 million, primarily from Vascepa sales, indicating growth of more than 50% year over year. It expects operating expense to increase approximately $200 to $250 million in 2020 from 2019 level mainly driven by increase in its sales team and various planned promotional programs related to Vascepa. We expect the company to provide an update on the guidance on its fourth-quarter earnings call.

In a major development, a regulatory application seeking Vascepa’s label expansion as an adjunct therapy to reduce cardiovascular risk based on data from REDUCE-IT cardiovascular outcomes study was approved by the FDA in December 2019. The company has been expanding its sales team to support the launch of Vascepa in the expanded label. We expect this activity to have driven operating expenses higher in the soon-to-be reported quarter.

Investor focus will be on updates on payer coverage for Vascepa and its launch in expanded patient population, expansion in Canada and Europe, and impact of competition from other approved drugs, especially Sanofi (SNY - Free Report) and Amgen’s (AMGN - Free Report) PCSK9 inhibitors, Praluent and Repatha, respectively on the fourth-quarter call.

Our proven model does not conclusively predict an earnings beat for Amarin this season. The combination of a positive Earnings ESP and a Zacks Rank #1 (Strong Buy), 2 (Buy) or 3 (Hold) increases the odds of an earnings beat. But that’s not the case here. You can uncover the best stocks to buy or sell before they’re reported with our Earnings ESP Filter.

Earnings ESP: Earnings ESP, which represents the difference between the Most Accurate Estimate (loss of 2 cents) and the Zacks Consensus Estimate (earnings of 1 cent), stands at -399.99%.

A Stock That Warrants a Look

Here is a biotech stock that you may want to consider, as our model shows that it has the right combination of elements to deliver an earnings beat in its upcoming release.

AMAG Pharmaceuticals, Inc. (AMAG - Free Report) has an Earnings ESP of +31.03% and a Zacks Rank #3. You can see the complete list of today’s Zacks #1 Rank stocks here.