Quarterly earnings of 45 cents per share lagged the Zacks Consensus Estimate of 46 cents. Nevertheless, the bottom line increased 2% year over year. This can be attributed to higher sales and reduced effective tax rate.

Hormel Foods' volumes witnessed a 1% drop, while rose 2% on an organic basis.

Sales in the Grocery Products unit decreased 10.9% to $540.6 million and volumes declined 14% due to the divestiture of CytoSport. Further, organic sales declined as gains from SPAM and Wholly could not completely offset weakness at Skippy. Also, segmental profit declined 28.2% to $68.4 million.

Revenues in the Jennie-O Turkey Store segment rose 2.8% to $330.1 million, with volumes rising 8%. Sales were driven by improvements at commodity and whole-bird businesses along with better pricing. Segmental profit grew 1.7% to $3.6 million, owing to increased commodity profits and operational gains.

International & Other revenues increased 5.4% to $161.9 million. Additionally, volumes increased 5%. Results were driven by improved fresh pork export volume and robust demand in China. However, segmental profit plunged 20.1% to $20 million on elevated input costs in China, Brazil and other countries in Asia.

The company ended the quarter with cash and cash equivalents of $724.4 million, and long-term debt of $309 million (excluding current maturities).

The company announced an agreement to acquire a Texas-based pit-smoked meats company, Sadler's Smokehouse. The buyout is in synch with Hormel Foods’ initiative of strengthening position in foodservice. Also, the company plans to expand the Sadler's product line into its retail and deli channels.

The deal, which is worth $270 million, is likely to be closed in March 2020. The acquisition is anticipated to be neutral to slightly negative to fiscal 2020 earnings as a result of the investments into the business and production facility. Yearly sales, excluding transfers to Hormel Foods, are likely to be somewhere near $140 million.

The company is pleased with the strength in the Refrigerated Foods segment and at the Jennie-O Turkey Store. The company is particularly encouraged about the prospects of SPAM, Whollyand Herdez. Also, it is undertaking efforts to enhance prospects at SKIPPY spreads and Hormel brands.

However, headwinds related to the African swine fever and the recent outbreak of coronavirus in China. Also, it expects elevated protein prices for fiscal 2020. 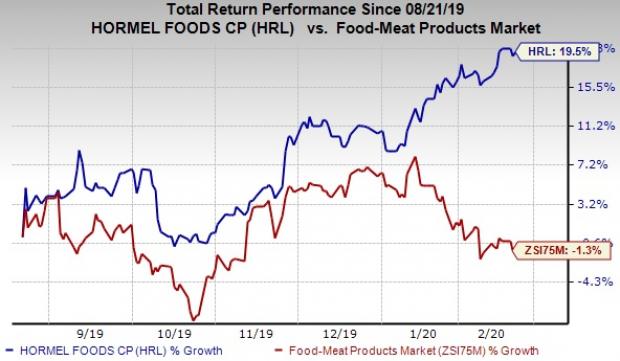 Pilgrim's Pride PPC, which currently carries a Zacks Rank #2 (Buy), has a long-term earnings growth rate of 22.5%. You can see the complete list of today’s Zacks #1 Rank stocks here.

Hershey Company HSY, which carries a Zacks Rank #2 at present, has a long-term earnings growth rate of 7%.