ViacomCBS VIAC reported fourth-quarter 2019 adjusted earnings of 97 cents per share that missed the Zacks Consensus Estimate by 30.7% and declined 42% year over year.

Adjusted OIBDA decreased 32% from the year-ago quarter to $1.16 billion.

Shares of ViacomCBS are down 8.6% in pre-market trading following the dismal fourth-quarter result. 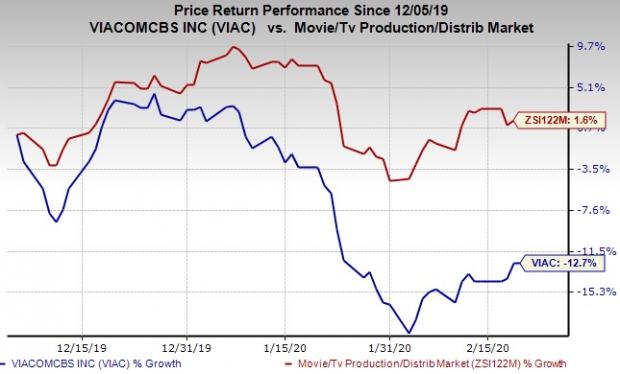 Other revenues fell 3% year over year to $83 million.

For 2020, ViacomCBS expects revenues to grow in mid-single digit.

Domestic Streaming & Digital Video revenues are projected to grow in the 35-40% range. Domestic streaming subscribers are expected to be roughly 16 million. Moreover, domestic Pluto TV MAUs are anticipated to be roughly 30 million.

Adjusted OIBDA is expected between $5.8 billion and $6.1 billion for 2020. Cost synergies are expected to be roughly $250 million.

Moreover, adjusted free cash flow is expected to be $1.8-$2 billion.

Long-term earnings growth rate for both TEGNA and Gray Television is pegged at 10%, while Netflix is expected to grow at 30%.