Jazz Pharmaceuticals PLC JAZZ is scheduled to report fourth-quarter 2019 results on Feb 25, after market close. In the last reported quarter, the company delivered a positive earnings surprise of 14.21%.

Notably, Jazz Pharma’s earnings history is encouraging as the drug company surpassed the Zacks Consensus Estimate in each of the last four quarters, with the average beat being 16.49%.

Jazz Pharma’s share price has increased 7.5% in the past year against the industry’s decline of 2.5%. 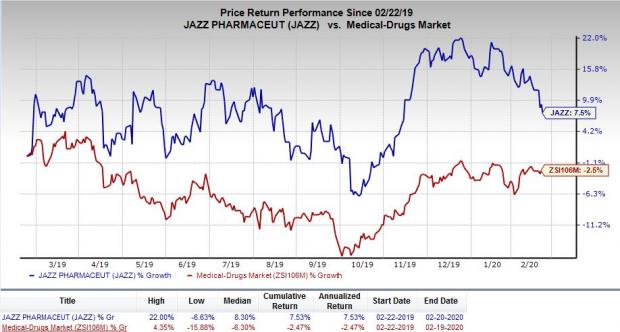 Jazz's sleep drug, Xyrem, generates the majority of the company's sales. The drug is approved for cataplexy and excessive daytime sleepiness and showed strong demand in the first nine months of 2019. We expect the trend to have continued in the fourth quarter, bringing significant revenues for the company. The Zacks Consensus Estimates for the drug’s sales is pegged at $430 million.

Moreover, the company’s new sleep drug, Sunosi, launched in the United States in July 2019 is likely to have boosted the top line further. In January 2020, Sunosi was approved in Europe. We expect the company to provide updates related to the launch of the drug in Europe on its fourth-quarter earnings call.

Apart from sleep drugs, the company has two oncology drugs — Vyxeos and Erwinaze – in its portfolio. We expect strong uptake for Vyxeos in Europe during the third quarter to have continued in the soon-to-be-reported quarter, driving its sales higher. However, supply constraints for Erwinaze are likely to have persisted in the fourth quarter, unfavorably impacting sales. Sales of another drug, Defitelio, vary from quarter to quarter. The Zacks Consensus Estimates for sales of Vyxeos, Erwinaze and Defitelio for the fourth quarter stood at $34.78 million, $46.97 million and $43.82 million, respectively.

Meanwhile, Jazz is also developing some of its marketed drugs for new indications as well as new pipeline candidates. The company submitted a new drug application seeking approval for JZP-258, a follow-on Xyrem drug, last month. During the fourth quarter, the company initiated a pivotal study to evaluate JZP-458 for the treatment of acute lymphoblastic leukemia and a phase II study to evaluate Defitelio for the prevention of CAR-T associated neurotoxicity. These regulatory activities and ongoing clinical developments along with launch activities related to Sunosi are likely to have driven operating expenses higher in the fourth quarter.

Our proven model does not conclusively predict an earnings beat for Jazz Pharma this season. The combination of a positive Earnings ESP and a Zacks Rank #1 (Strong Buy), 2 (Buy) or 3 (Hold) increases the odds of an earnings beat. But that’s not the case here. You can uncover the best stocks to buy or sell before they’re reported with our Earnings ESP Filter.

Earnings ESP: Jazz Pharma has an Earnings ESP of +0.11%. The Zacks Consensus Estimate is pegged at an earnings of $4.16.  You can uncover the best stocks to buy or sell before they’re reported with our Earnings ESP Filter.

Here are some biotech stocks that you may want to consider, as our model shows that these have the right combination of elements to post an earnings beat in their upcoming releases.

Vericel Corporation VCEL has an Earnings ESP of +11.29% and a Zacks Rank #1. The company is scheduled to release fourth-quarter results on Feb 25. You can see the complete list of today’s Zacks #1 Rank stocks here.

Immunomedics, Inc. IMMU has an Earnings ESP of +3.37% and a Zacks Rank #2. The company is scheduled to release fourth-quarter results on Feb 24.