Pilgrim's Pride Corporation PPC reported fourth-quarter 2019 results, with the top and the bottom line improving year over year. The upside can be attributed to improved performance in the United States, Mexico and European operations. However, earnings lagged the Zacks Consensus Estimate. Let’s take a closer look.

Quarterly adjusted earnings of 14 cents per share surged 55.6% from the figure reported in the year-ago quarter. We believe that higher sales and margins supported the year-over-year upside. However, the bottom line lagged the Zacks Consensus Estimate of 22 cents. .

In the reported quarter, Pilgrim's Pride generated net sales of $3,063.5 million, up 15.3% year over year. Results were backed by higher sales in the United States, Mexico and European operations.

Revenues from the U.S. operations amounted to $1,904.5 million, up 4.6% year over year. The upside was driven by strong demand in case-ready and small bird operations. Results also benefited year over year from better conditions in the U.S. commodity market. Further, Prepared Foods segment improved in the quarter. Additionally, the company’s progress on its Key Customer Strategy is aiding growth.

Mexican operations generated revenues of $343.6 million in the reported quarter, up 6.9% year over year. Results gained from increased volume, which more than offset lower prices along with weak macro conditions in Mexico.

Revenues from European operations moved up 58.5% year over year to $815.4 million as it continued to witness higher input costs in the region. The uptick was driven by the company’s efforts to mitigate input-cost challenges, investments in automation along with focus on improved yields. Robust operational efficiencies further aided the performance. Further, solid domestic demand and export for pork contributed to the upside.

Pilgrim's Pride’s shares have rallied 25% in the past year compared with the industry’s growth of 18.6%. 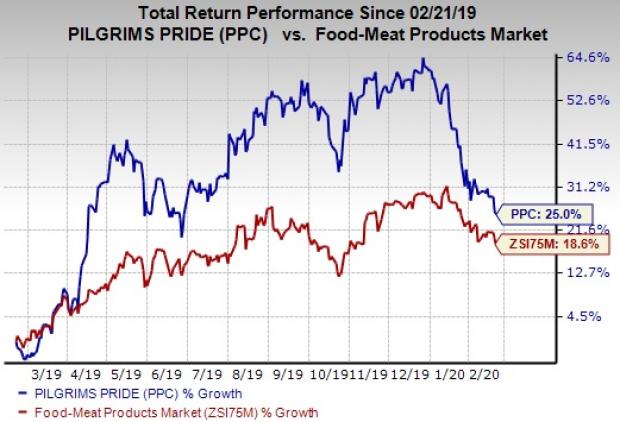 Hormel Foods HRL, which carries a Zacks Rank #2 (Buy), has a long-term earnings growth rate of 6.4%. You can see the complete list of today’s Zacks #1 Rank stocks here.

Hershey Company HSY, which carries a Zacks Rank #2, has a long-term earnings growth rate of 7%.