In the last reported quarter, the exploration and production company’s adjusted earnings of 19 cents per share beat the Zacks Consensus Estimate by a penny, primarily due to a surge in oil equivalent production volumes, partially offset by lower price realizations of commodities and higher total operating expenses. The firm beat earnings estimates thrice in the trailing four quarters, delivering average positive surprise of 4.3%. 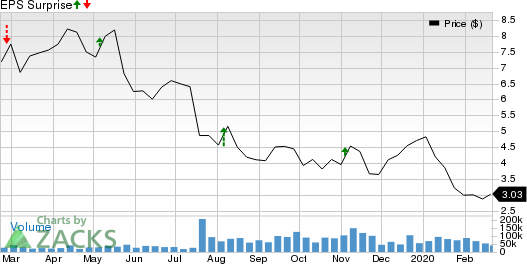 The Zacks Consensus Estimate for fourth-quarter earnings per share of 16 cents has witnessed three upward and downward revisions each in the past 30 days. This estimate is indicative of a 5.9% decrease from the year-ago reported figure.

The Zacks Consensus Estimate for fourth-quarter revenues is pegged at $180.5 million, suggesting an increase of 11.5% from the year-ago reported figure.

Callon Petroleum’s fourth-quarter results are expected to be buoyed by its focus on exploration, and production of oil and gas resources in the Permian Basin. Notably, Permian has three major sub basins — Midland Basin, Delaware Basin and Central Basin Platform. Of these, Callon Petroleum has strong footprint in the Midland and Delaware Basins, which are likely to have supported fourth-quarter profits.

The Zacks Consensus Estimate for average daily production volumes is pegged at 43,061 barrels of oil equivalent per day (Boe/d), indicating a rise from the year ago period’s 41,087 Boe/d. The same for natural gas output is pegged at 5,262 million cubic feet (MMcf), pointing to a rise from the year-ago quarter’s 4,225 MMcf. However, the Zacks Consensus Estimate for crude oil production volumes is pegged at 3,021 thousand barrels (MBbls), implying a decline from the year-ago period’s 3,076 MBbls. As crude oil constitutes the majority of the company’s total output, the potential decline is likely to have affected quarterly profits.

The Zacks Consensus Estimate for realized oil price is pegged at $55 per barrel (without derivatives), which indicates an increase from the year-ago period’s $48.89. However, natural gas price estimate of $1.63 per Mcf suggests a decrease from the fourth-quarter 2018 level of $2.72.

Our proven model does not conclusively predict an earnings beat for Callon Petroleum this time around. The combination of a positive Earnings ESP and a Zacks Rank #1 (Strong Buy), 2 (Buy) or 3 (Hold) increases the odds of an earnings beat. That is not the case here as you will see below.

Earnings ESP: Earnings ESP for the company is -40.65%. This is because the Most Accurate Estimate of 9 cents is lower than the Zacks Consensus Estimate of 16 cents. You can uncover the best stocks to buy or sell before they’re reported with our Earnings ESP Filter.

While earnings beat looks uncertain for Callon Petroleum, some energy stocks with the perfect mix of elements to beat on earnings in the upcoming quarterly release are:

EQT Corporation (EQT - Free Report) has an Earnings ESP of +53.42% and a Zacks Rank #3. The company is set to release quarterly earnings on Feb 27. You can see the complete list of today’s Zacks #1 Rank stocks here.

Centennial Resource Development, Inc. (CDEV - Free Report) has an Earnings ESP of +14.87% and a Zacks Rank #3. The company is set to release quarterly earnings on Feb 24.

Matador Resources Company (MTDR - Free Report) has an Earnings ESP of +0.96% and a Zacks Rank #3. The company is set to release quarterly earnings on Feb 25.

Moderna (MRNA) to Report Q4 Earnings: What's in the Cards?