Barring one-time items, adjusted earnings came in at 25 cents per share, which beat the Zacks Consensus Estimate of 24 cents.

Mining and pelletizing pellet sales volume was around 5.8 million long tons in the fourth quarter, down 10% year over year. The decline was caused by lower customer demand, partly offset by inter-company sales to the Toledo HBI facility.

Realized revenues per long ton declined 8.7% year over year to $90.8. The results were affected by an unfavorable true-up of earlier sold volumes caused by lower HRC prices and pellet premiums as well as unfavorable customer mix.

Cash cost of goods sold rate per long ton fell 2.8% year over year to $63.62 due to lower royalties and employee-related expenses.

The company expects average iron ore prices, steel prices and pellet premiums to be $90 per metric ton, $650 per short ton and $50 per metric ton, respectively, for 2020. Based on these assumptions, it expects to generate net income of around $300-$325 million and adjusted EBITDA of $550-$575 million for 2020 on a standalone basis.

Cleveland-Cliffs’ shares have lost 37.9% in the past year compared with the industry’s 5.8% decline. 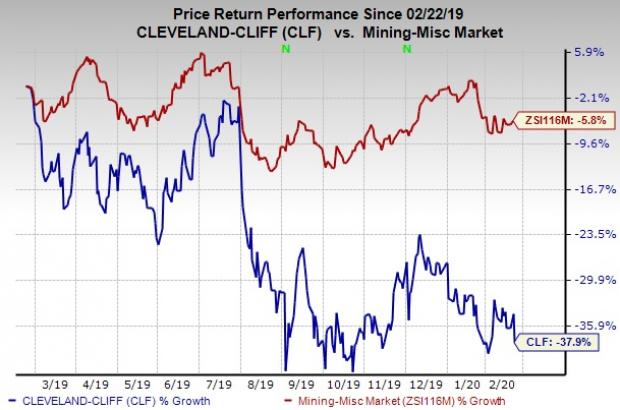 Daqo New Energy has an expected long-term earnings growth rate of 29%. The company’s shares have gained 114.8% in the past year.

Sibanye has an expected long-term earnings growth rate of 20.4%. Its shares have returned 197.2% in the past year.

Impala Platinum has an expected long-term earnings growth rate of 26.5%. The company’s shares have surged 200.8% in the past year.