Adjusted loss was 11 cents per share for the quarter, which was wider than the Zacks Consensus Estimate of a loss of 9 cents.

Per the company, the results were impacted by lower shipments to the automotive market, a sharp decline in steel spot market selling prices, and higher costs for iron ore, coal and coke during the reported quarter. These were partly offset by reduced costs for scrap and energy.

Moving ahead, AK Steel expects that major maintenance outage at its Dearborn Works, and substantial investments made in the blast furnace and steelmaking operations will generate significant recurring cost savings.

Shares of the company have dipped 8.9% in the past year compared with the industry’s 23.7% decline. 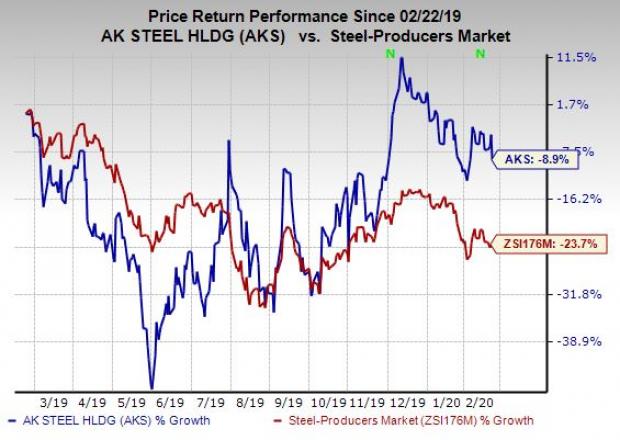 Daqo New Energy has a projected earnings growth rate of 353.7% for 2020. The company’s shares have rallied 114.8% in a year. It currently sports a Zacks Rank #1 (Strong Buy). You can see the complete list of today’s Zacks #1 Rank stocks here.

Commercial Metals currently has a Zacks Rank #2 (Buy) and a projected earnings growth rate of 20.7% for 2020. The company’s shares have rallied 22.1% in a year.

NovaGold has a projected earnings growth rate of 11.1% for 2020 and carries a Zacks Rank #2. The company’s shares have surged around 142% year over year.