Emergent BioSolutions Inc. EBS reported fourth-quarter 2019 earnings of $1.57 per share, which missed the Zacks Consensus Estimate of $1.67. However, the bottom line increased significantly from the year-ago quarter’s earnings of 78 cents.

Revenues in the reported quarter increased 33.1% from the prior-year period to $360.4 million, primarily backed by high product sales owing to the company’s recent acquisitions and other product sales. The top line also beat the Zacks Consensus Estimate of $351 million.

Shares of Emergent have inched up 1.9% in the past year against the industry’s decline of 1.8%. 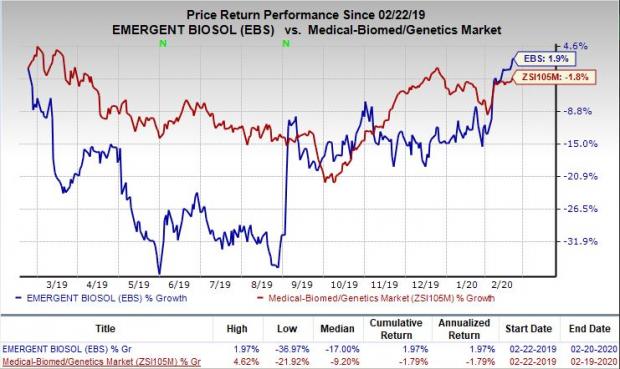 Total product sales surged 43% to $310.8 million from the year-earlier quarter. This revenue rise was mainly on the back of contribution from Narcan nasal spray and higher sales of small pox vaccine ACAM2000. In fact, this newly acquired product of Narcan (naloxone HCl) nasal spray added $66.9 million to product sales, jumping 60% year over year.

Narcan was added to Emergent’s portfolio following the acquisition of Adapt Pharma in October 2018.

ACAM2000, which was acquired from Sanofi SNY in the fourth quarter of 2017, added $78.5 million to product sales in the reported quarter. Other product sales also soared 75% on a year-over-year basis to $72.5 million.

However, sales of anthrax vaccines (BioThrax and AV7909) declined 31% to $92.9 million in the reported quarter.

Revenues from contracts and grants decreased 9% year over year to $24.1 million, primarily due to reduced activities associated with certain funding programs.

Contract manufacturing revenues fell 5% to $25.5 million from the year-ago figure. This downside was primarily due to the contracted service work that took place in fourth-quarter 2018 but did not recur in the same period last year.

The company recorded adjusted EBITDA of $134.3 million in the reported quarter compared with $76.2 million in 2018, reflecting an increase of 76.2%.

Adjusted earnings per share of $2.91 were higher than the prior-year earnings of $2.39.

Along with the earnings release, Emergent reiterated its financial outlook for the current year, which it provided last month.

Emergent expects adjusted net income within $160-$210 million while adjusted EBITDA is anticipated in the band of $300-$360 million.

The European Medicines Agency's (EMA) Committee for Medicinal Products for Human Use (CHMP) rendered a positive opinion recommending approval of Emergent’s single-dose oral cholera vaccine, Vaxchora, in January 2020. A decision from the regulatory body in Europe is expected within three months.

During the same month, Emergent received an agreement from the EMA to develop its chikungunya vaccine candidate CHIKV VLP. The company is looking to conduct a phase III safety and immunogenicity study using serum neutralizing antibodies (SNA) as an immune correlate of protection to evaluate the clinical benefit of the vaccine candidate.

We note that in September 2019, the EMA’s CHMP granted PRIority Medicines (PRIME) designation to CHIKV VLP.

Earlier, CHIKV VLP was granted a Fast Track tag by the FDA in May 2019.

On the fourth-quarter conference call, management stated that it reached a settlement agreement related to the ongoing litigation with Perrigo’s PRGO abbreviated new drug application (ANDA), seeking to market a generic version of Narcan nasal spray.

Per the settlement, Perrigo will be able to launch the generic of Narcan nasal spray as of January 2033 or before, depending on the outcome of Emergent’s ongoing litigation with Teva Pharmaceutical TEVA. This settlement is subject to customary closing conditions.

Notably, February 26 has been scheduled as the date for closing arguments by the court, regarding the litigation with Teva.