Including one-time items, the company reported a loss per share of $1.23 compared with earnings per share of 57 cents in the prior year quarter.

Gross profit, before depreciation and amortization, plunged 38% year over year to $663 million, mainly due to decline in steelmaking coal prices. Overall gross margin came in at 33% compared with the year-ago quarter’s 44%.

Adjusted EBITDA was $491.6 million, down 48.3% from the prior-year quarter. EBITDA margin was 24% in the quarter compared with the year-earlier quarter’s 39%.

The Copper segment’s net sales dipped 6.5% year over year to $448.5 million in the December-end quarter. The segment’s operating profit came in at $32.6 million in the reported quarter compared with the prior-year quarter’s $69.7 million.

Sales came in at $8.97 billion in the year compared with the previous year’s $9.66 billion. The sales figure missed the Zacks Consensus Estimate of $9.13 billion.

Prevalent global economic uncertainties and the impact of the coronavirus outbreak are likely to erode commodity prices in the current year. The company is focused on expanding the Quebrada Blanca Phase 2 and Neptune Bulk Terminals projects.

The company’s shares have lost 53.2% over the past year, compared to the industry’s decline of 5.8%. 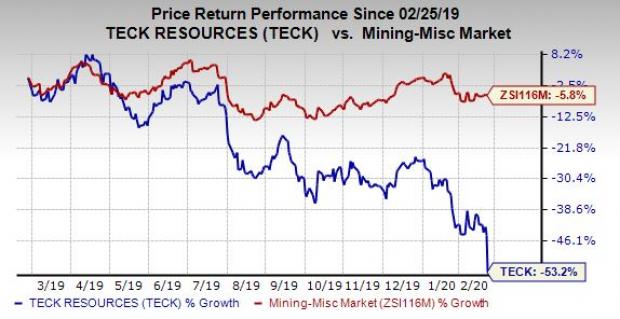 Daqo New Energy has an expected long-term earnings growth rate of 29%. The company’s shares have surged 114.8% in the past year.

Sibanye has a projected long-term earnings growth rate of 20.4%. Its shares have soared 197.2% over the past year.

Impala Platinum has an expected long-term earnings growth rate of 26.5%. The company’s shares have appreciated a whopping 200.8% in a year’s time.