The Finnish company is focused on its strategy that hinges on four priorities. The first is to lead in high-performance end-to-end networks with its CSP customers. The second one is based on its pursuit to expand network sales to select vertical markets. Building a strong standalone software business remains the third strategic priority. The fourth pillar emphasizes on creating new business and licensing opportunities in the consumer ecosystem.

Nokia has been working to build a robust scalable software business and expand it to structurally attractive enterprise adjacencies. It has reached more than 66 commercial 5G contracts across the globe with 19 live networks. The company’s 5G technology has been contracted by all four nationwide operators in the United States, all three in South Korea and all three in Japan. The Nokia Experience Center is a service operations center (SOC) offering that delivers closed-loop automation for operators to detect and recover from service-impacting issues.

Nokia is considered to be the only vendor with a globally available end-to-end product portfolio that covers all 5G network elements. This includes radio, core, cloud and transport as well as management, automation and security. However, its Mobile Access business is being impacted by increased competition in some accounts as rivals, including Ericsson ERIC and Huawei, seek to take share in the early stage of 5G. Also, some customers have reevaluated their vendors in light of security concerns, creating near-term pressure for Nokia to invest in order to secure long-term benefits.

Thanks to technological partnerships and service enhancements, shares of Nokia have increased 19.9% against the industry’s decline of 0.9% in the past three months. 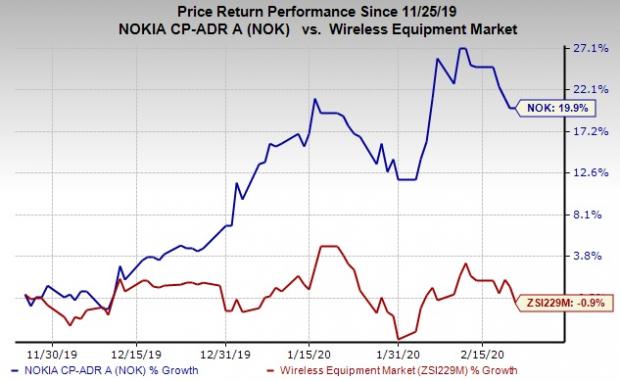 In fourth-quarter 2019, net sales at Nokia Software tumbled 7.2% year over year to €870 million. This was in comparison to a strong period a year ago, especially in North America and India. The segment’s gross margin grew 90 basis points (bps) to 59.7%, while operating margin declined 60 bps to 34.9%.

The company surpassed earnings estimates twice in the trailing four quarters and missed the same in remaining two quarters, delivering a positive surprise of 87.5%, on average. The stock is currently trading with a forward P/E of 15.27X.

A couple of better-ranked stocks in the industry include Motorola Solutions, Inc. (MSI - Free Report) and Qualcomm Incorporated QCOM, both carrying a Zacks Rank #2 (Buy). You can see the complete list of today’s Zacks #1 Rank (Strong Buy) stocks here.