Orion Engineered Carbons S.A. (OEC - Free Report) recorded profits of $19 million or 31 cents per share in the fourth quarter of 2019, up 21% from a profit of $15.7 million or 25 cents a year ago. The bottom line was driven by higher income from operations.

Adjusted earnings per share for the quarter were 42 cents, topping the Zacks Consensus Estimate of 38 cents.

Revenues fell around 16% year over year to $322.4 million in the reported quarter. The figure also missed the Zacks Consensus Estimate of $365.5 million. Sales were hurt by reduced volumes, lower feedstock costs to customers and unfavorable currency translation that more than offset base price increases and favorable product mix.

Overall volumes fell around 9% year over year in the reported quarter as broad economic weakness led to lower volumes in automobile and polymer end markets.

Net sales from the Specialty Carbon Black segment fell around 10% year over year to $114.8 million in the quarter. Sales were impacted by reduced volumes, the pass through of lower feedstock costs with certain customers and unfavorable currency translation. Volumes declined around 7% due to softer automotive and polymer market demand and economic weakness in all key regions.

The Rubber Carbon Black segment logged net sales of $207.7 million in the quarter, down around 20% year over year, impacted by the pass through of lower feedstock costs to customers and lower volumes that more than offset base price increases. Volumes dropped roughly 10% on weaker demand in South Korea, China and Europe and continued demand weakness in mechanical rubber goods.

The company sees adjusted EBITDA for 2020 to be in the band of $250-$280 million with an expectation of delivering flat-to-modest year over year growth in adjusted EBITDA. It also expects to continue generating strong cash from operations. The company also expects capital expenditures in the range of $130- $150 million for this year.

The company's shares are down 40.3% over a year, compared with the 29.9% decline of the industry it belongs to. 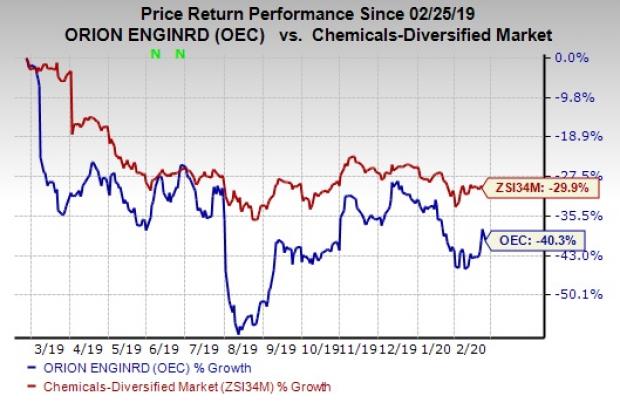 Daqo New Energy has projected earnings growth rate of 353.7% for 2020 and sports a Zacks Rank #1 (Strong Buy). The company’s shares have rallied roughly 87% in a year’s time. You can see the complete list of today’s Zacks #1 Rank stocks here.

NovaGold has projected earnings growth rate of 11.1% for the current fiscal and carries a Zacks Rank #1. The company’s shares have surged around 146% over a year.

Commercial Metals has estimated earnings growth rate of 20.7% for the current fiscal and carries a Zacks Rank #2 (Buy). The company’s shares have shot up roughly 21% in a year’s time.

Colfax to Gain From Solid Product Lines & Buyouts Amid Risks