Per the deal, the regional provider of communications services will deploy seamless Fioptics services in the districts of rural Ohio. Operating in the provinces of Hamilton, Montgomery, Preble and Butler, BREC aims to gain access to high-performance fiber-based Internet services of Cincinnati Bell. Majority of these fiber Internet and home phone services will be available to a limited number of customers by early July 2020.

The Phase 1 program will see the deployment of fiber broadband services to about 2,000 cooperative members in the rural areas with higher availability over the next 16 months. Based on its viability, the deal will further evaluate the potential expansion of its core fiber offerings to 3,000 additional customers. The offerings include secured fiber Internet services with speeds up to 1,000 Mbps, whole-home Wi-Fi and wirecare protection with 24/7 reliable support for connected devices. Given Cincinnati Bell’s fiber footprint, it will also deliver fiber connectivity services to Oxford, Ohio-based BREC’s substations and other equipment.

Cincinnati Bell’s efforts to evolve from a legacy copper-based telecommunications company to an IT company with contemporary fiber assets, offering seamless network solutions to both consumer and business customers, are remarkable. Its move to prioritize customer satisfaction, followed by the creation of job opportunities, augurs well for the region’s economic development.

Notably, the company’s investment in fiber supports the growing IoT trend, which reflects higher usage of broadband connections and smart-home devices. Reinforced with the claim of future-proofing 50% of its network services, Cincinnati Bell is undergoing a drastic transformation to upgrade its network infrastructure to the next-gen fiber. This will support the burgeoning demand for data and accelerate 5G mobile-technology growth.

Backed by proper execution of its operational plans, the stock has rallied 30.9% against the industry’s decline of 32.6% in the past year. 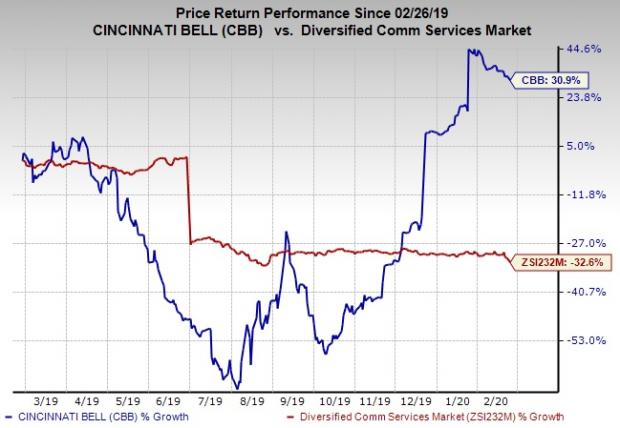 Sempra exceeded estimates thrice in the trailing four quarters, the positive earnings surprise being 3.2%, on average.

Give Your Child a Head Start in Investing: 3 Big Brand Stocks