Shares of Franco-Nevada Corporation (FNV - Free Report) scaled a fresh 52-week high of $122.6 during the trading session on Feb 24, before retracting a bit to close at $121.25. An upbeat outlook of its energy assets as well as of the Cobre Panama project and significantly higher gold prices have contributed to this rally.

Franco-Nevada has a market cap of roughly $22.6 billion. The company has an expected long-term earnings per share growth rate of 4%. It surpassed the Zacks Consensus Estimate in three of the trailing four quarters, the average positive surprise being 11.75%. 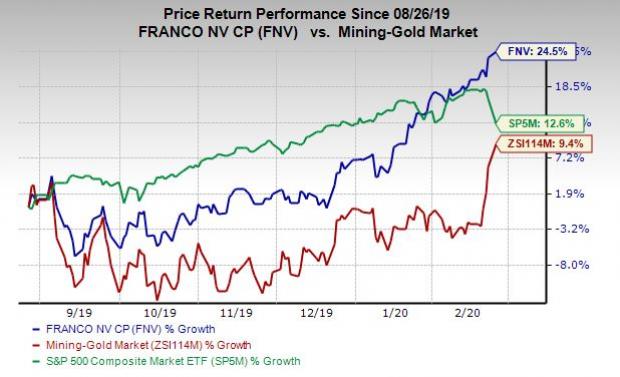 Gold prices have been up 6% over the past month, trading above $1,600 an ounce — marking the highest level since 2013. The rapid spread of the Coronavirus epidemic in China and other parts of the world has increased investors’ appeal to seek safe-haven options like gold, which has aided Franco-Nevada’s share-price rally. Also, the trade war, geopolitical conflict between the United States and the Middle East, slowdown in manufacturing activity and rate cuts have collectively helped lift the yellow metal's investment appeal so far.

Franco-Nevada’s Cobre Panama project commenced commercial production in September 2019, a month earlier than expected. Franco-Nevada received a total of 21,526 GEOs from the project in third-quarter 2019. The company anticipates this project to be on track for deliveries toward the higher end of its guidance at 20,000-40,000 GEOs. It estimates GEOs to be at the upper end of the 490,000-500,000 band on impressive 2019 results and higher-than-expected deliveries from the project. Further growth is anticipated as the Cobre Panama project ramps up.

On Jul 22, 2019, Franco-Nevada acquired a 1% overriding royalty interest, covering approximately 350,000 acres in the Marcellus from Range Resources Corporation, for $300 million. The royalty applies to the existing production and future development from the Marcellus formation, and future potential development from the Utica and Upper Devonian formations. The company now expects to generate revenues at the higher end of its guidance of $100-$115 million from its energy assets, aided by the Marcellus royalty acquisition and stellar performance of energy assets. With the continued development of its U.S. oil & gas assets, it expects energy assets to contribute $140-$160 million by 2023.

Daqo New Energy has an expected long-term earnings growth rate of 29%. The company’s shares have surged 114.8% in the past year.

Sibanye has a projected long-term earnings growth rate of 20.4%. Its shares have soared 197.2% over the past year.

Impala Platinum has an estimated long-term earnings growth rate of 26.5%. The company’s shares have appreciated a whopping 200.8% in a year’s time.