The Home Depot, Inc. HD has posted fourth-quarter fiscal 2019, wherein earnings and sales beat the Zacks Consensus Estimate. However, the company’s top line declined on a year-over-year basis, while earnings improved. It also provided a solid view for fiscal 2020.

Shares of the home-improvement retailer rose 2.6% in the pre-market session, following the better-than-expected top and bottom-line results. Moreover, the Zacks Rank #3 (Hold) stock has rallied 27.6% in the past year, outpacing the industry’s growth of 25.6%. 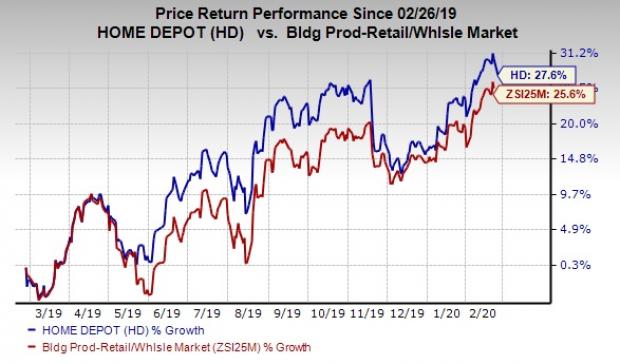 Net sales declined 2.7% to $25,782 million from $26,491 million in the year-ago quarter but beat the Zacks Consensus Estimate of $25,747 million. The sales decline is attributed to one extra week in the fourth quarter of fiscal 2018, which contributed incremental sales of $1.7 billion. The company's overall comps grew 5.2%, with a 5.3% improvement in the United States.

In the reported quarter, comps were aided by 4.1% rise in average ticket, offset by a 6.4% decline in customer transactions. Moreover, sales per square foot rose 2.8%.

Operating income rose 0.7% to $3,403 million, while operating margin expanded 40 bps to 13.2%. Despite a decline in gross margin, operating margin benefited from a decrease in SG&A expenses.

Moreover, it hiked its quarterly dividend by 10% to $1.50 per share, which indicates an annualized dividend of $6.00 per share. The raised dividend is payable Mar 26, 2020, to shareholders of record as of Mar 12.

The company noted that fiscal 2019 was a year of significant progress on its One Home Depot investment plan. Home Depot is in the second year of the aforementioned plan. Through the two years, the company increased sales by more than $9 million.

Moreover, the company expects operating margin of 14% and net interest expenses of $1.2 billion for fiscal 2020. Effective tax rate is anticipated to be 24%. For fiscal 2020, the company projects earnings per share of $10.45, suggesting 2% growth from the reported in fiscal 2019.

Additionally, it plans to open six stores in fiscal 2020. It expects to repurchase shares worth at least $5 billion. Capital expenditure is likely to be $2.8 billion, with depreciation and amortization expenses of $2.4 billion. Moreover, the company expects cash flow from operating activities of $13.5 billion.

Costco Wholesale Corporation COST has a long-term earnings growth rate of 8.1% and a Zacks Rank #2 at present.

How Sanderson Farms (SAFM) Looks Just Ahead of Q1 Earnings