Epizyme Inc. (EPZM - Free Report)   incurred a loss of 59 cents per share in fourth-quarter 2019, wider than the Zacks Consensus Estimate of a loss of 51 cents and the year-ago loss of 29 cents.

Collaboration revenues in fourth-quarter 2019, earned as part of the company’s alliance with Boehringer Ingelheim, were $4.3 million compared with $9.7 million in the prior-year period. Revenues beat the Zacks Consensus Estimate of $3 million.

Shares of Epizyme have increased 57.3% in the past year against the industry’s 5.8% decline. 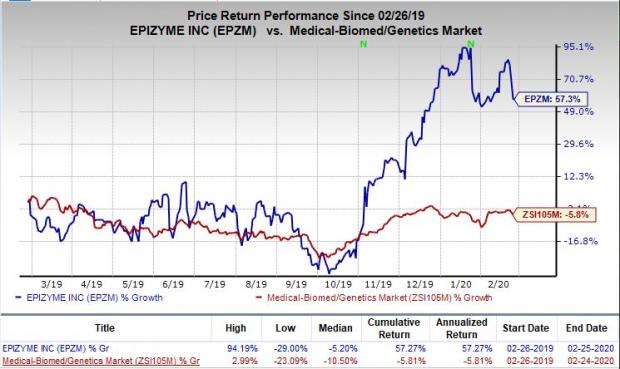 On Jan 23, 2020, the FDA granted accelerated approval to tazemetostat for the treatment of adults and pediatric patients aged 16 years and older with metastatic or locally advanced Epithelioid Sarcoma (ES) not eligible for complete resection. It will be marketed under the brand name Tazverik. Tazverik became commercially available to patients on Feb 1, 2020.

Research and development expenses increased 75.7% year over year to $38.3 million in the quarter. The increase is due to the initiation of the global confirmatory studies in ES and FL and early expansion of the tazemetostat program into new indications and combinations

General and administrative expenses were $23.5 million in the quarter, up 92.6% from the year-ago period due to launch and commercialization of Tazverik for the ES indication, as well as initial expansion to prepare for FL commercialization in the United States.

Epizyme had $381.1 million of cash, cash equivalents and marketable securities as of Dec 31, 2019 compared with $240.3 million in the corresponding period of 2018. The company expects its cash runway to extend into at least 2022.

The FDA accepted the company’s supplemental NDA (sNDA) for filing for the accelerated approval of Tazverik for a proposed indication of patients with relapsed or refractory FL who have received at least two prior lines of systemic therapy. The FDA granted Priority Review for the sNDA and set an action date of Jun 18, 2020.

The company also expects to complete the safety portion of the ongoing global phase Ib/III confirmatory study assessing Tazverik in combination with "R2" (Revlimid plus Rituximab) compared with R2 plus placebo in the second-line treatment setting for FL and advance into the efficacy portion of the study.

Guardant’s loss per share estimates for 2020 have narrowed from $1.18 to $1.13 in the past 60 days. The company delivered a trailing four-quarter positive earnings surprise of 39.21%, on average.