Revenues, primarily from its sole marketed drug Vascepa, were up almost 85.3% year over year to $143.3 million in the quarter, beating the Zacks Consensus Estimate of $134.44 million.

Despite strong fourth-quarter results, shares of Amarin were down 2% in after-hours trading on Feb 25, possibly due to significant decline in the broader S&P 500 Index. The stock has declined 12.6% in the past year compared with the industry’s 5.8% decrease. 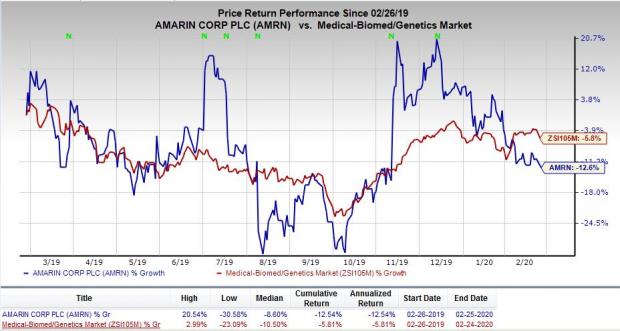 Product revenues, entirely from Vascepa, were $142 million, up 84.3% year over year. Sales were up 26.4% sequentially. Strong demand for the drug continues to drive sales higher. Per IQVIA, normalized prescriptions for Vascepa increased approximately 85% year over year to 909,000.

Vascepa was initially approved by the FDA as an adjunct to diet to reduce triglyceride levels in adult patients with severe (≥500 mg/dL) hypertriglyceridemia.

In December 2019, the FDA approved a label expansion for Vascepa as a treatment to reduce cardiovascular risk in patients with persistent elevated triglycerides on statin therapy for LDL-C (bad cholesterol). The approval was based on the results of the REDUCE-IT cardiovascular outcomes (“CVOT”) study. The drug is under review for a similar indication in Europe. Please note that the drug is not approved any indication in Europe.

Selling, general and administrative expenses were up 20.5% to $96 million due to rise in commercial and other promotional costs to support launch of Vascepa in expanded label.

Research & development expenses decreased 6.8% to $11.1 million due to a decline in costs, following completion of REDUCE-IT study.

Amarin reported revenues of $429.8 million, up 87.5% year over year. The company’s adjusted earnings for 2019 were 2 cents per share against a loss of 33 cents in the year-ago period.

Revenues for the full year as well as the reported quarter were at the highest level recorded by the company.

Amarin increased its sales force through 2019 to support the launch of Vascepa’s label expansion. It has doubled its sales team compared to 2019 and is planning to increase targeted healthcare professionals from 50,000 to 75,000.

On its fourth-quarter earnings call, Amarin stated that payer coverage for Vascepa has improved in 2020 with expanded coverage by various payers in January and February. The company expects coverage to improve further in the coming months.

In January 2020, the company announced the approval for Vascepa in Canada to reduce the risk of cardiovascular events in statin-treated patients with elevated triglycerides based on REDUCE-IT study data. Its commercial partner in Canada has started promoting Vascepa in the country.

Amarin had provided guidance for revenues and operating expenses with its preliminary results announced in January 2020. It maintained the view on its fourth quarter earnings call.

The company continues to expect revenues for 2020 to be in the range of $650-$700 million, primarily from Vascepa sales, indicating growth of 57% year over year at the mid-point of the range. The company remains on track to increase its sales team to approximately 800 in early 2020. It expects its operating expense to increase approximately to $200 to $250 million from expenses incurred in 2019, especially to support its increased sales team and various promotional programs related to Vascepa.

The company had announced in its preliminary results that it anticipates cash flow to remain negative in the beginning of 2020. Meanwhile, the company stated that it has sufficient funds to maintain projected operations and to achieve positive cash flow following the commercial launch of Vascepa in the expanded label.

Meanwhile, discontinuation of a CVOT study by AstraZeneca AZN last month on Epanova, an omega-3 based drug like Vascepa and a possible strong competitor, further boosts Vascepa's prospects.

What's in the Offing for CBRE Group's (CBRE) Q4 Earnings?