Tesla, Inc. TSLA and Panasonic Corp. (PCRFY - Free Report) will be ending the joint production of solar cells at the Buffalo, NY-based Gigafactory 2 facility of the former, after struggling for years to boost the unit output. Tesla’s energy revenues tanked $24 million in 2019, after several rounds of layoffs that started in 2018.

Tesla and Panasonic had formed a joint venture in 2016 to manufacture solar cells. Per the deal, Panasonic had initially agreed to pay $271.96 million for part of the equipment at the Buffalo plant, following which the companies commenced producing components for solar photovoltaics in 2017.

Though Panasonic-made solar cells were primarily to be used by Tesla to make Tesla’s own solar panels, the current Solar Roof product of the former uses cells made in China. Meanwhile, Panasonic has been selling cells it produced at the Gigafactory 2 to Japanese homebuilders and other customers.

Per Panasonic, the company would cease production at Gigafactory 2 by the end of May 2020 and exit the factory by the end of September. The withdrawal comes as part of Panasonic’s strategy to divest its unprofitable businesses, in order to drive growth.

Further, Tesla’s relationship with Panasonic hit a rough patch last November, after the latter denied any plan to set up a battery-cell factory for the former in China. Following this, Tesla signed an agreement with South Korea’s LG Chem Ltd. and China’s Contemporary Amperex Technology Co. Limited (CATL) to source batteries for its Gigafactory 3 in China.

Nevertheless, both firms intend to continue working together on automotive batteries for Tesla's electric vehicles at Gigafactory 1 in Reno, NV. However, the latest move comes as another setback to their strained relationship, which was once considered a key component of Panasonic’s turnaround. 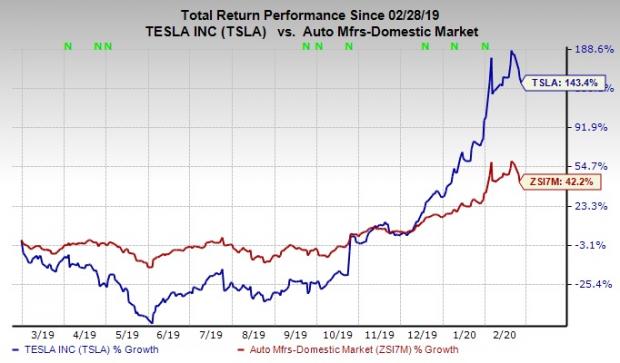 Meanwhile, Tesla has been making efforts to improve vehicle deliveries, sequentially and annually, with some expected fluctuations from seasonality. For full-year 2020, the company expects vehicle deliveries to exceed 500,000 units. Due to the ramp-up of Model 3 in Shanghai and Model Y in Fremont, production will likely outpace deliveries this year. Both solar and storage deployments will be up at least 50% in 2020.

Some better-ranked stocks in the Auto-Tires-Trucks sector include SPX Corporation SPXC and Fox Factory Holding Corp. (FOXF - Free Report) , both carrying a Zacks Rank of 2 (Buy), at present. You can see the complete list of today’s Zacks #1 (Strong Buy) Rank stocks here.

Fox Factory has an estimated earnings growth rate of 9.67% for the ongoing year. The company’s shares have gained 6.4% in a year’s time.