Revenues of $288.7 million marginally fell from the year-ago level of $289.9 million. However, the metric beat the Zacks Consensus Estimate of $254 million.

Total proved oil and gas reserves of Matador grew 17% through 2019 to 252.5 million barrels of oil equivalent (BOE). Of the total amount, 59% was oil and 92% were located in the Delaware Basin. Investors should note that 42% of the 2019 estimated proved reserves were developed. 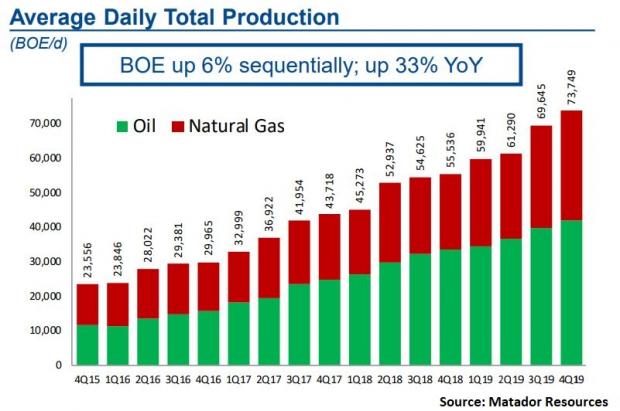 Average realized price for oil (excluding realized derivatives) was $56.36 per barrel, up from $49.09 in the year-ago quarter. However, natural gas price of $2.31 per thousand cubic feet was lower than $3.47 in the prior-year quarter.

The company’s production taxes, transportation and processing costs increased to $3.88 per BOE from $3.53 in the year-ago quarter. Moreover, plant and other midstream services operating expenses rose to $1.51 per BOE in the quarter from the year-earlier number of $1.45. However, lease operating costs decreased from $4.56 per BOE in fourth-quarter 2018 to $4.43. Total operating expenses per BOE in the quarter was recorded at $27.88, higher than the year-ago level of $26.39.

The company spent $748 million during 2019, excluding acquisitions and seismic data. Matador allocated $671 million of the total amount to drill, equip and complete wells, and $77 million toward midstream operations.

The company expects 2020 oil equivalent production within 27-28.3 million barrels, indicating an increase from 24.2 million BOE in 2019. Notably, it expects 2019 capital expenditure for drilling, completing and equipping wells in the range of $690-$750 million, suggesting growth from the 2019 level of $671 million. San Mateo midstream capital expenditure for the year is expected in the band of $85-$105 million, implying a rise from $77 million in 2019.

Moreover, the company expects 13 wells from the Stateline asset area to come online in September, which will boost production. Additionally, in the same month, its San Mateo cryogenic natural gas processing plant is expected to start processing half billion cubic feet of natural gas per day.