Arena Pharmaceuticals, Inc. ARNA incurred loss of $1.76 per share for the fourth quarter of 2019, wider than the Zacks Consensus Estimate of a loss of $1.62. The company had recorded earnings of $1.35 in the year-ago quarter.

Moreover, Arena’s total revenues of $3 million in the reported quarter plunged 65.3% year over year. However, the top line beat the Zacks Consensus Estimate of $1.06 million.

Shares of Arena were up 4.5% in after-market trading on Feb 26, following the earnings release. However, the company’s stock has declined 4.8% in the past year compared with the industry’s decrease of 9.2%. 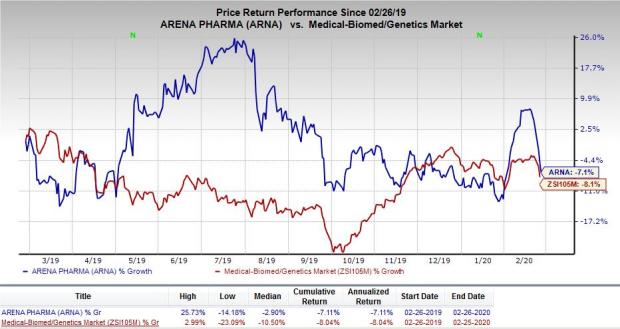 Arena recorded collaboration and other revenues of $6.6 million, down 4.3% year over year, which included $5 million development milestone revenues from its collaboration partner, Everest Medicines, in Greater China. The partner initiated a phase III study to evaluate Arena’s pipeline candidate, etrasimod, in patients with ulcerative colitis (“UC”) in October 2019.

The company recorded royalty revenues of negative $3.6 million due to reduction in estimated future royalties from Belviq sales. It has a collaboration agreement with Japan-based Eisai for commercialization of the weight management drug. Earlier this month, Eisai announced voluntary withdrawal of Belviq from the U.S. market following FDA’s recommendation. The FDA reviewed data from a cardiovascular outcomes study evaluating Belviq and assessed that the drug has an unfavorable risk-benefit profile. Data showed that patients treated with Belviq and diagnosed with cancer were higher than placebo.

General and administrative (G&A) expenses surged 72% to $22.2 million from the year-ago figure.

The company ended the year with $1.1 billion in cash, cash equivalents and investments. It is anticipating net cash used in the first quarter of 2020 to be approximately $95 million and increase in high single digits to low double digits every quarter in the year.

Arena reported total revenues of $806.4 million in 2019, compared with $18 million in 2018. The significant increase was due to $800 million in upfront payment received from United Therapeutics UTHR in 2019 related to license agreement for Arena’s pulmonary arterial hypertension candidate, ralinepag.

The study is part of the ELEVATE UC registrational program, which comprises two pivotal studies to evaluate etrasimod in UC patients. The company has plans to initiate ELEVATE UC 12, a 12-week induction study, later this year.

A phase IIb study — ADVISE — is evaluating etrasimod in patients with atopic dermatitis. Data from the study is expected in the second half of 2020. Another phase IIb study — CULTIVATE — was initiated earlier this year to evaluate the candidate in Crohn's disease.

Two separate mid-stage studies are planned for initiation later this year to evaluate etrasimod in patients with eosinophilic esophagitis, a gastro-intestinal disease, or alopecia areata, an autoimmune disorder.

A phase II CAPTIVATE study is evaluating another candidate, olonarib, as a treatment for abdominal pain associated with irritable bowel syndrome. Data from the study is expected in the second half of 2020. The company also has an early-stage candidate, APD418, for treating acute heart failure. The candidate was granted Fast Track designation for the indication by the FDA last month.

In January 2020, Arena announced that it will form a new subsidiary, Arena Neuroscience. The subsidiary will focus on programs and platforms to develop therapies targeting neuroinflammation indications.